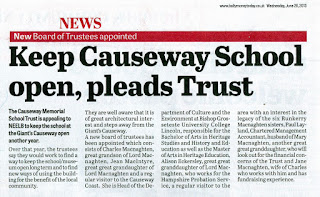 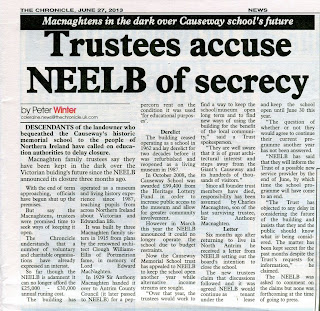 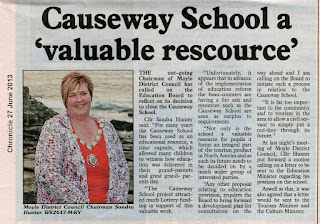 New information has surfaced since I published blog #2 earlier today. The missing minutes of the NEELB Education Committee held on 11 December 2012 have now been added to the NEELB website but Appendix 8, the Ray Gilbert report** into the Causeway Memorial School Museum which was presented to the committee on 11 December, has not yet been added. Here's a snippet from the minutes: 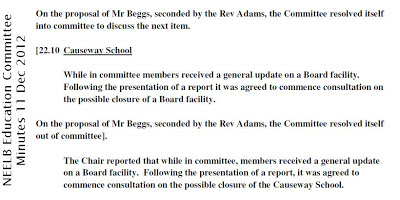 This agreement to 'commence consultation on the possible closure of the Causeway School' was ratified by the Board one week later, possibly without discussion:

However a letter to a Causeway Memorial School trustee in January 2013 by a Board official tells a different story; here's a snippet:

I can find no mention of this change from consultation about closure to actual closure in the January or February minutes of either the Education Committee or the full Board.

The Minister of Education gave the following response to an Assembly question in February 2013:

Did the Minister mislead MLAs and the general public? Have Board officers closed the Causeway Memorial School Museum without the permission of the Board and without consultation with the stakeholders? Why was it deemed necessary for the Education Committee to go into committee to discuss the Gilbert report? Surely that can't be in the public interest.

Let the museum continue for another year whilst Board officers consult with a range of stakeholders about options for its future.