Acting Within The Law - EU Style

Government ministers and officials who've groaned about the demands made upon them by Freedom of Information requests are now having to fight a battle on another front.

Individuals and businesses can take their enquiries and complaints to the EU Commission where a new process is being piloted to get them answers from Member State authorities within a ten week deadline. The EU Commission is currently in communication with the NI Executive re. certain aspects of the Rathlin ferry contract.

Those enquirers and complainants who have been amazed and disappointed by the cavalier treatment of their personal data by state officials will, hopefully, be reassured by this Commission pledge:

The rules on personal data confidentiality are maintained - in contacts with national authorities, we will only divulge your identity if you have specifically authorised us to do so.

The Curious Case of Rathlin Rip

Those who've been following the Rathlin ferry saga on NALIL blog will be familiar with the images that have appeared on the associated Rathlin Rip Flickr webpages. 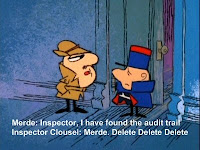 There are lots of photographs as well as copies of documents unearthed with the aid of Freedom of Information requests to government departments and other bodies in Belfast, Dublin, Edinburgh and Glasgow.

Rathlin Rip takes its name from the tides that surge through the narrow channel between Rathlin Island and the North Antrim Coast.

I'm told that one of the directors of Rathlin Island Ferry Limited, the newish company operating on the Ballycastle-Rathlin ferry route, has recently registered two new websites, rathlinrip.com and rathlinrip.co.uk. The reasons for such a quaint course of action as yet are not discernible. Perhaps they'll eventually appear in the webpages of Slugger O'Toole - or the European Commission Maritime Affairs newsletter!!

Has RIFL got money to burn? The same director registered www.nevintaggart.com on March 24, 2009. Perhaps her money and time would be better spent on maintaining the wages of the crews on the Cape Clear ferry that she and her husband operate in Co Cork. I'm hearing that the strike that was scheduled for March 30 has been postponed to Easter.

“This action is being undertaken, as a result of management’s refusal to honour the terms of Towards 2016, Review and Transitional Agreement 2008-2009, and specifically because of management’s stated intention to unilaterally cut salaries by approximately 18 per cent, along with other cuts to contracted terms and conditions.

“We have tried on a number of occasions to arrange meetings, and to date, we have not even received the courtesy of a reply from the company.

Can RIFL shore staff and crew anticipate the same swingeing cuts and cavalier treatment? They must envy the wage increases awarded at the end of 2008 to their former colleagues in Calmac.