Moyle ratepayers and others ought to spend more time in the public gallery in Sheskburn on Mary Street, Ballycastle. There's great entertainment to be had at the twice monthly puppet show as Mr Punch subjects Ms Judy to some traditional baiting and beating. I missed part of a recent performance when the curtain came down and the characters went 'into committee' :)

Councils have a duty to assert rights of way; they also have a responsibility for mapping these rights of way. However, when the new centre at the Giants Causeway was about to be built the Roads Service issued an Abandonment Order on part of the roadway that leads to the stones - and such an order apparently extinguishes a right of way. Why didn't Moyle Council, in association with the Department of the Environment, exercise its power to divert the roadway instead? Would this not have avoided the current predicament?

The Tourist Information Centre (TIC) at the Giants Causeway lies behind the reception desk in the new Visitor Centre.


So the TIC is considered by the National Trust to be part of the visitor experience whereas TICs in other places are free.

I phoned a friend this morning. She runs a B&B and popped over to the centre to collect some brochures for the benefit of her guests. She was told by an attendant in the car-park that she would still have to pay £8.50 on her departure. She said she wouldn't be paying, went into the centre, complained at reception, collected the brochures and left in a state of some annoyance. Her guests main complaint has been about pricing at the visitor centre; £8.50 on top of the B&B charge plus an evening meal could be a major disincentive.

I walked into the visitor centre two weeks ago following the previous council discussion. I asked about the TIC - the receptionist volunteered to take me into TIC for free - no ticket would be needed - had I taken my car into the car-park I might have had to pay £8.50 to get out! If I not been aware of this issue I might easily have bought a ticket and gone into the TIC - so clear noticing is needed or a different arrangement needs to be made.
Posted by Nevin at 3:06 pm

HM Coastguard Coordination Centre in Bangor - Cause for Concern? 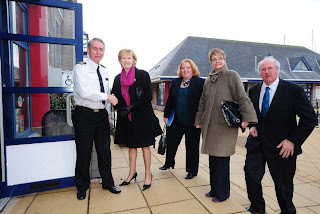 I visited the Coastguard Station in Bangor this morning with Lady Sylvia Hermon MP, Margaret Ritchie MP and Jim Shannon MP. We need to work together to resist the changes proposed to this vital service. .. Naomi Long MP, 14 February 2011


Two years on, the Control Centre in Bangor has been retained but a significant change has taken place. Bangor now has responsibility for part of the west coastline of Scotland following the closure of Clyde in December, in addition to its responsibility for the Northern Ireland coastline. 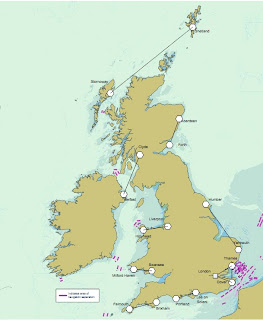 Yesterday's post in the For Argyll blog poses concerns about the current arrangements. Here is a snippet:

The maritime world was concerned about the consequences of the new loading on the Belfast station, already responsible for the entire coastline of Northern Ireland.

At the time of these major changes to the Coastguard service Mr Newell had made it known locally that if he considered the future was becoming dangerous, then he would go.

This may not, of course, be why he has now done so – in under a month after the full formal handover of much of the former Clyde sea area to Belfast; but it is the inference and has to be a matter of concern.

If anyone can shed further light on the current state of affairs in Bangor please contact an elected representative, the For Argyll blog or NALIL blog. It's most important that the excellent work carried out by our emergency services is enhanced, not treated in a reckless manner. The decision by Government to close local control centres before the new super control arrangements are built and tested does not inspire confidence.

When will Belfast MRCC in Bangor be getting a helicopter for its sector? The current helicopter fleet operates out of Lee-on-Solent, Portland, Stornoway and Sumburgh.
Posted by Nevin at 11:36 am

Ballycastle - Against All Reason

In an age of austerity, traders and their staff need all the custom they can get. The new Ballycastle Heritage Trail has been funded by the Department for Social Development, the Department for Enterprise, Trade and Investment and Moyle District Council.

Minister McCausland: "This heritage trail is a novel and fun way to encourage people to explore the town centre, and bringing more people into the town centre should have a positive impact on the local economy."

The introduction of charging in the car-park off Ann Street near the town centre, on the other hand, encourages shoppers to take their business elsewhere. 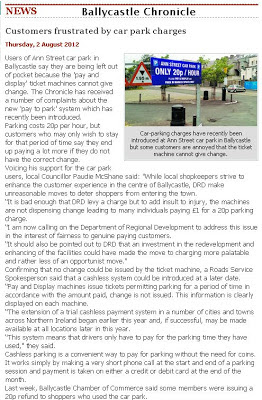 Going From Bad To Worse 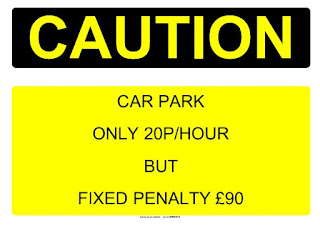 20p per hour is not an exorbitant charge, it's a disincentive, but the £90 penalty** is punitive. 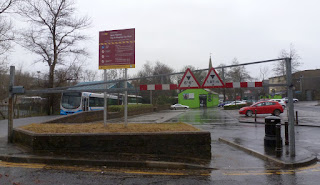 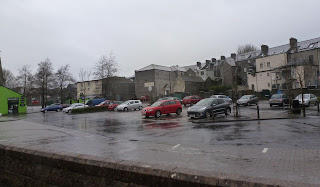 A quick vox pop elicited the following tales of woe:

1. A shop assistant put £1.20 in the machine to cover her shift but failed to note that the £1 coin had been rejected so the sticker on the car screen was only valid for one hour. Imagine the shock when, on return, there was a £90 fixed penalty notice in place. That's a lot of hours down the drain if you're on or close to the minimum wage.

2. A different shop assistant has also had problems with coin acceptance and now comes to work early in case alternative coins have to be obtained from place of work.

3. A shopper who is a regular user of the car park left the previous day's ticket in place and put the new ticket on a different part of the windscreen. The parking attendant failed to spot the current ticket and attached a £90 penalty notice. In this case the shopper was able to prove his ticket purchase.

Other such tales can be added to this list by sending them to nalilblog@gmail.com

** A friend was walking along Ballycastle promenade recently when he spotted one car in an otherwise empty street and two traffic wardens. Would they have attached a £90 fixed penalty notice if the vehicle had breached the time limit by 30 minutes - or are they permitted to use some common sense?
Posted by Nevin at 9:02 pm 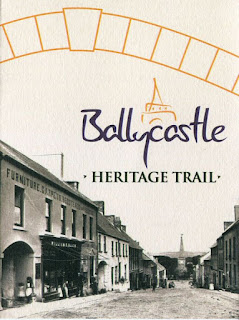 Minister McCausland said: “This heritage trail will encourage more people to come into Ballycastle town centre spend time there and learn more about the rich history and culture of the town.

“Some visitors to the seafront part of the town are unaware of what Ballycastle town centre has to offer. This heritage trail is a novel and fun way to encourage people to explore the town centre, and bringing more people into the town centre should have a positive impact on the local economy.” 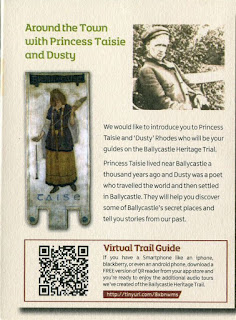 Arlene Foster, Tourism Minister said: “Ballycastle has a unique heritage and conservation tradition and is also a key coastal resort. This investment in the Heritage Trail will help visitors uncover the natural, built and cultural heritage associated with the town.
“I am confident that the heritage trail will become a major attraction for visitors on the Causeway Coastal Route journey and indeed the Causeway Coast and Glens destination. The local tourism economy will also enjoy the economic and social benefits of welcoming more visitors to the town centre.” 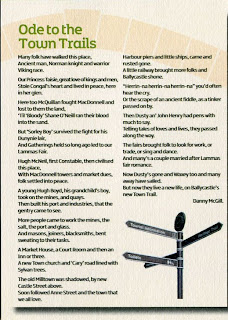 Inspector Bryan Hume, Chairman of the Ballycastle Town Partnership commented “there are many reasons to stop off and enjoy the beauty of Ballycastle. The heritage trail is designed to enhance that experience, help the visitor learn more about the history and culture of the town before sampling the diverse shopping experience that this market town offers through its many independent traders”. 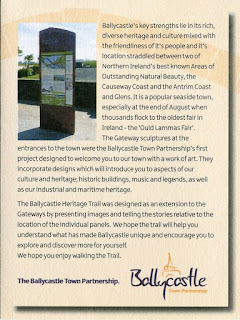 Take an introductory tour in the company of local historian, Danny McGill, and then follow the ministerial advice!
Posted by Nevin at 6:28 pm Ballywillan Drama Group is a church based organisation located in Portrush, County Antrim, Northern Ireland. It is part of Holy Trinity Church and is named after the parish of Ballywillan that the Church serves. However, from these small beginnings, the group has flourished into an award-winning interdenominational society. 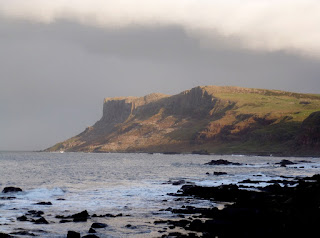 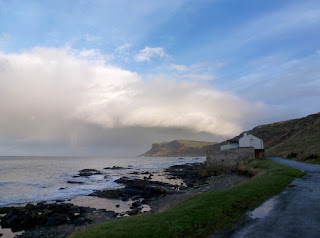 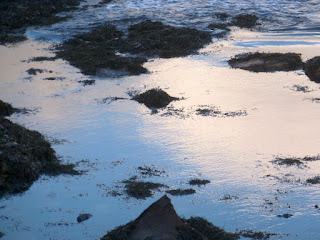 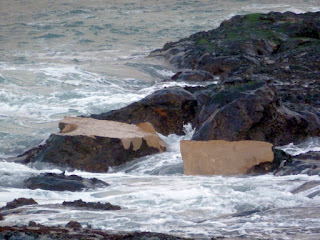 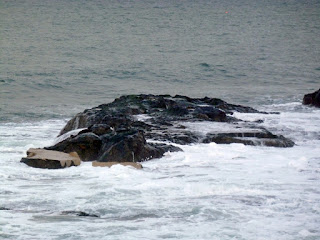 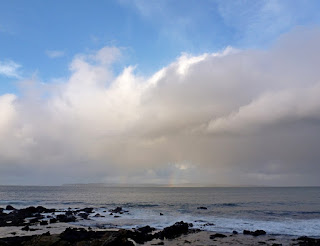 A hint of a rainbow rising over Church Bay, Rathlin Island
Posted by Nevin at 1:43 pm