Martha Craig - Correspondence with the Office of President McKinley

Thanks to Molly Kodner for obtaining a copy of this correspondence

When Martha met the President 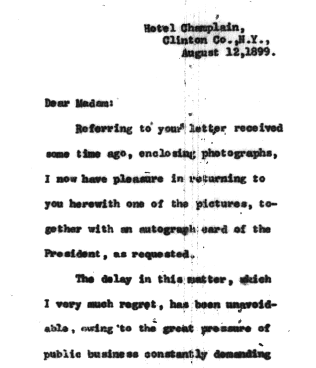 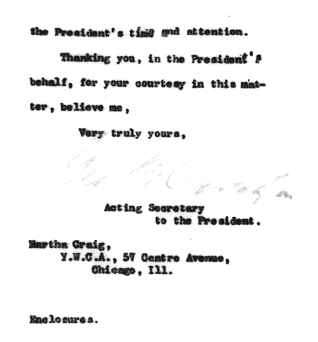 McKinley was greeting visitors in the Temple of Music at the Pan-American Exposition on September 6, 1901, in Buffalo, New York, when he was shot twice at close range by lone assassin Leon Czolgosz. As McKinley collapsed, he was caught and supported by his aides, among them Cortelyou. As he was held in their arms he whispered, "My wife... be careful, Cortelyou, how you tell her. Oh, be careful." 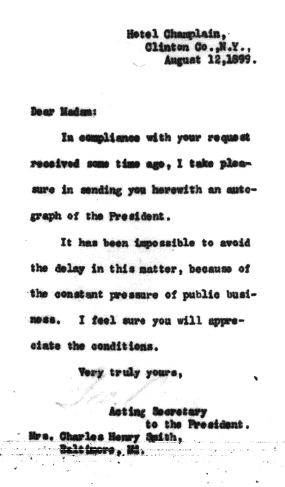 I wonder if these letters arrived in Chicago before Martha departed on her Hiawatha quest or if they were forwarded.
Posted by Nevin at 11:59 pm

Martha Craig and some McKinley relics from Conagher

Borne From Ancestral Home in Ireland to the Capitol

Irish History Spelled His Name Without the "C", She Said

ULSTER FOLK PROUD OF HIM

NEW YORK, March 6 - Martha Craig is an Irish girl who has come over to America to lecture, and who has been received by President McKinley, and has presented him with souvenirs of the McKinley homestead in Ireland, together with photographs which she took herself, and a family tree showing the President's line of descent.

Miss Craig in her rambles through Ireland had visited the scene of President McKinley's ancestral home at Dervock, near Ballymoney, County Antrim. She says the Irish people are very proud of the fact that the President of the United States is of Irish descent. She herself was particularly interested, and determined to visit him when she came to America.

In rambling about the old place she picked up an old horseshoe and a bit of peat. "I shall present these to the President," she told herself. And she has done so. The two relics now occupy posts of honor in the President's library. 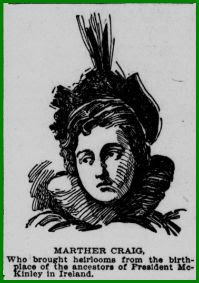 Miss Craig's assertions that President McKinley's great-grandfather lived in the little thatched house near Dervock, and that the remains of his great-uncle, the martyred patriot, lie in the old graveyard at Derrykeighan, are well authenticated. The fact has been authenticated by the Ulster Journal of Archeology.

Miss Craig is a business-like little woman, about thirty years old. She has come to America to lecture about Ireland, and she has brought stereopticon views with her to illustrate what she has to say. In the Crystal palace during the jubilee last year she lectured to more than 5000 people at one time. The idea that an Irish lecturer should visit England with a view to education and not agitation about Ireland appealed to the Londoners so strongly that they supported her beyond her expectations.

"That's my idea of doing the best work for Ireland," said Miss Craig. "I don't want to say a word against the methods of Maud Gonne. She is my friend, and I have a great admiration for her ability. She believes in agitation. I believe in education.

"The McKinley homestead," she says, "is one of the most interesting farm houses to be found in that part of Ireland. It is old-fashioned and rough, but strong and unyielding as the oak beams that support the roof. We don't build sky-scrapers in ireland, but we do build houses that time cannot wither nor age decay."

Her interview with the President was brief. She says:

"I told Mr McKinley of my visit to the home of his ancestors in Ireland and presented him with pictures of the old McKinley homestead that I took at Conagher less than three weeks ago. I told him that the people of Ulster were very proud that a descendant* of Francis McKinley, one of the martyrs to the revolution of 1798, should have become President of the most friendly nation and the most powerful ally that Ireland ever had.

"He seemed pleased. 'H'm,' he said, glancing over the documents I handed him. 'You spell it without the "c," I observe.'

The President said he was sorry he couldn't visit the Irish '98 centennial.

* Not a direct descendant of Francis McKinley but of one of Francis' ancestors. Martha Craig was born at Carneal, between Larne and Carrickfergus, in 1866.
Posted by Nevin at 7:53 pm 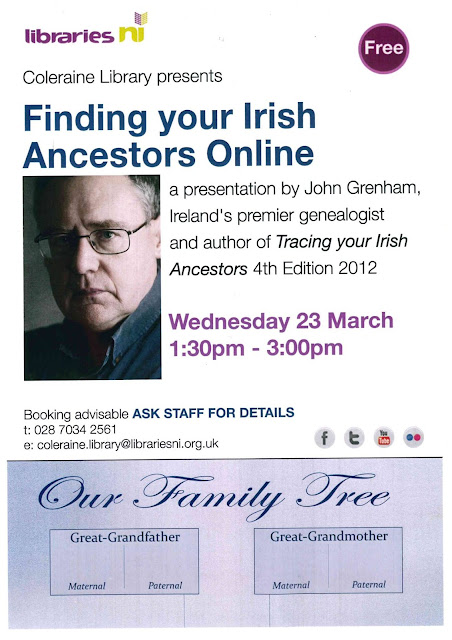 Composition - a poem about the Dark Hedges

Through falling dusk and biting frost
I cycle slowly home,
Between two rows of lofty trees
Which meet to form a dome,
Through which I glimpse the shining stars
As across the sky they roam. 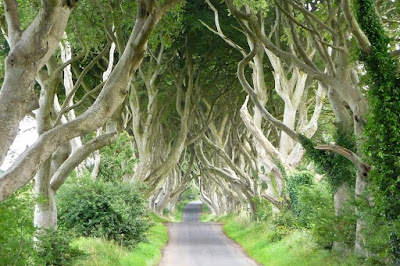 The night is calm, the air is sharp
And white the frozen ground,
Then suddenly past old Knocklayde
The bright moon peeps around.
And all the landscape is transformed
Without the slightest sound.

The stars, a paler yellow now
Regard with pride this scene
Their humble light is not required
When comes their stately queen.
Like loyal subjects they look on
With admiration keen.

Why must that car with jarring noise
Now rustle into sight
And break the spell the moon has cast
As it pours forth it's light
O'er this enchanted mystic scene
And silent frosty night. 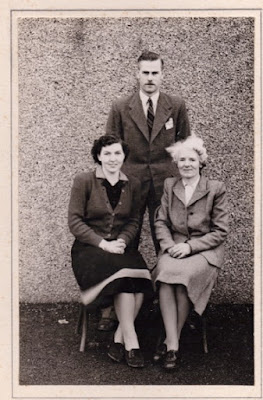 A snippet from the contract:

Dooey - (keep) off the beaten track 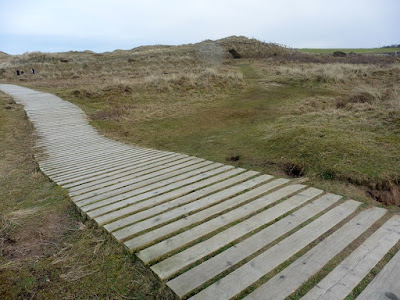 Lattice of boards to reduce wear-and-tear of the dunes 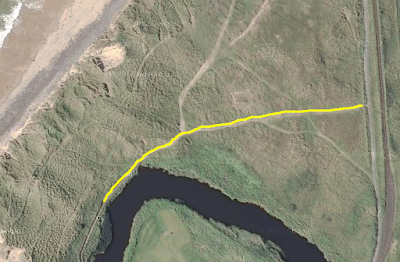 There's a boarded walk-way from the east end of the Three-quarter Bridge alongside the River Bush and on to the path that runs alongside the tram-track. Sadly, many walkers are still taking short-cuts across the dunes. Perhaps Causeway Coast and Glens Borough Council might consider putting up a few signs to discourage the wayward walkers. 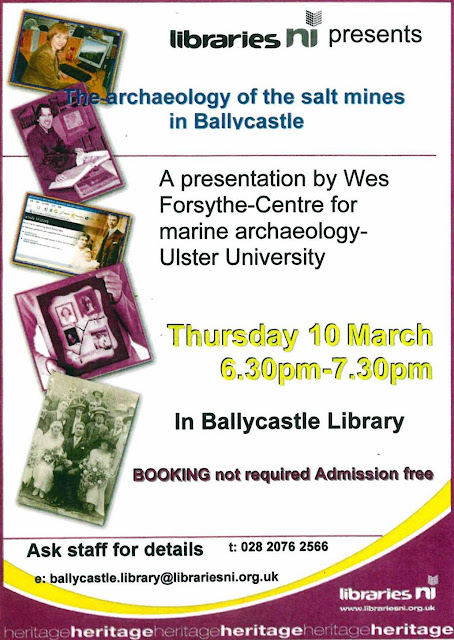 Ballycastle and the Atlantic Salt Trail

Ballycastle and the Atlantic Salt Trail 3

The Archaeology of Salt Production in Ireland 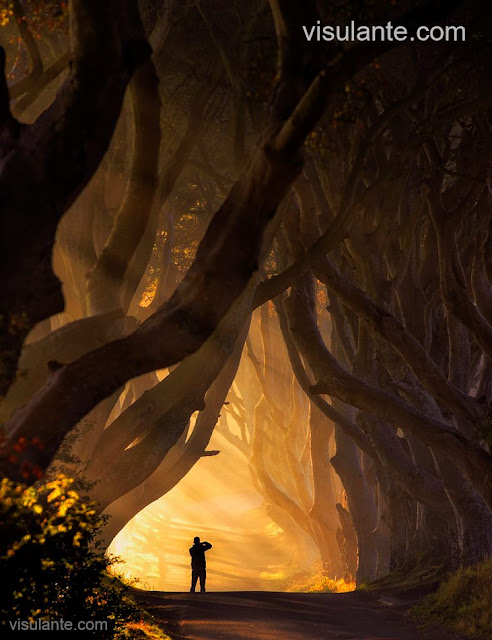 A visitor enjoying a solitary experience of the Dark Hedges. This beautiful avenue of elderly beech trees suddenly became a big attraction after featuring in a scene from an HBO (Home Box Office) production. Though the avenue prior to this has been quietly discovered and enjoyed by visitors for well over two hundred years.

Unfortunately for the preservation of the site and and conservation of the trees, those charged with developing tourism infrastructure applied no real vision or foresight to the avenue in anticipation of the huge increase in footfall that a sustained global advertising campaign would generate. This has led to some serious verge destruction, traffic management issues, littering and some minor vandalism to the trees themselves.

It has also led to a visually cluttered avenue in summertime where unrestricted parking occurs, making it far from the idyllic view enjoyed by the visitor in the photo above. Having said that the avenue is still very unique though the experience could be dramatically and simply improved.

Much lobbying has taken place and hopefully the powers that be will take some urgent action to remedy the situation for the benefit and enjoyment of all.

In the meantime, one way to help in preserving and increasing the visitor experience at the site is to not park on the avenue itself. This will at least leave the avenue free of cars and coaches and more attuned to the idyllic vision which is used to globally promote the site. It will allow visitors, many of whom have travelled thousands of miles, to enjoy a more pedestrian view of the trees rather than an avenue of park cars and coaches.

There are two facilities adjacent to the avenue (hotel and country house), one with free parking and both with refreshment facilities.

This past winter we lost more two trees to high winds and several limbs damaged. These natural elements are unavoidable but the current issues are easily remedied.

For more information about the area visit: Causeway Coastal Route and look under 'Armoy'

I am personally very passionate about this because the Dark Hedges inspired my imagination during formative years spent with grandparents a few miles away at Cloughcorr.

[Save the Dark Hedges - Facebook group]
Posted by Nevin at 12:09 pm