I'm told that plans are afoot which could dramatically alter the visual impact of the Diamond in Ballycastle town centre, especially for folks coming down Castle Street.

Holy Trinity Church at the Diamond has been attacked several times recently by 'anti-social elements' but now the threat is coming from a different quarter.

In theory, the town centre will be protected from inappropriate development by certain features of the proposed Northern Area Plan 2016. However, I'm not sure about the current status of this plan or the effectiveness of the Planning Service in implementing it.

Those features or combination of features that contribute to the environmental quality, integrity or character of this area are listed below.

1. The tree framed Listed Building of Holy Trinity Church, set behind The Diamond, provides a high quality visual focus in the heart of the town.

Any alterations to this centrepiece of the Conservation Area will be required to be particularly sensitive to its visual quality.

The architectural sketch shows that the listed building is also to be 'framed' by extensions and by a new zinc clad church hall. The latter lurking behind on the right reminded someone of an aircraft hangar!!

If you wish to support the conservation of Ballycastle's vanishing heritage you can send your letter of objections to Application No 2009/0180F to District Planning Office, County Hall, Castlerock Road, Coleraine. BT51 3HS and seek the support of your MP, MLAs and District Councillors.
Posted by Nevin at 9:14 pm

A friendly smile can sometimes be mistaken for an aggravating stare - apparently. I stumbled on this hilarious court report from 1933 whilst researching some Bushmills family history for folks in England and Australia.

Similar reports will be gratefully received at nalilblog@gmail.com
Posted by Nevin at 7:42 pm 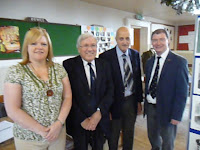 I took some photos at this year's Highlander Challenge and posted them on Flickr.
Posted by Nevin at 12:22 pm

The Importance of Proof Reading

Mary O'Driscoll, one of the directors of RIFL, gave me a copy of their leaflet 'Rathlin Island Walks'. A friend drew attention to the distances from Ballycastle printed underneath the location map so I've used Google maps to check them out. Here are the approximate distances according to Google:

I collected one of Mary's Cape Clear leaflets along with the current timetable for the Rathlin ferry route. It seems that catamarans have become very fashionable, North and South. 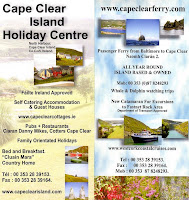 It would appear that the phantom catamaran advertised in the Cape Clear leaflet has not yet been spotted in the waters off Cape Clear. Is there a Cape Clear Triangle? Is this a variant on the Loch Ness monster yarn?

There seem to be two other schools of thought on this miraculous vessel: the mass hypnotists and the traditionalists. The mass hypnosis theorists believe that since the boat has been passed by the M.S.O. it must exist. If islanders can’t see it then we are all the subject of some kind of general delusion.

A RIFL spokeswoman said that the Rathlin Express, currently moored in Rathlin Harbour, is expected to go into service in about a weeks time when some things have been sorted out and the crew has been trained.

I wonder who is financing this vessel. RIFL and its sister company in Cape Clear appear to be strapped for cash - reported redundancies, wage cuts, industrial tribunals and death in service benefits - and the DRD budgeted £1.2 million for a passenger only vessel has been withdrawn. Strangely enough, this is the approximate cost of the Rathlin Express, according to its builders. Does the DRD have a Mystic Meg or is there an alternative explanation? It really is uncanny. It seems that the Committee for Regional Development has no crystal balls.

By the way, Government ministers and senior MCA officials are still struggling to provide a convincing explanation as to why MCA permitted the MV Canna to carry passengers in September 2008 with an invalid passenger certificate and presumably no insurance.
Posted by Nevin at 4:29 pm