"We accept there is a need for some modernisation, but the Government’s proposals for the future of the Coastguard Service are seriously flawed.

We found little support for the current proposals and we have no confidence that, under these proposals, the Coastguard will in future be able to respond to emergencies at sea as well as they do now, let alone in a more effective way.

A drastic reduction in the number of rescue co-ordination centres will result in a loss of local knowledge amongst coastguard officers who are responsible for taking calls from people and vessels in distress. The committee is not convinced by the Government's claim that technology can, at present, replace such local knowledge.

Whilst there is a case for reducing the total number of rescue co-ordination centres, any future reorganisation of the Coastguard should be based on 24-hour centres, as they are now, and not on stations open only during daylight hours, as the Government proposes."

"We found no evidence that a suitable commercial alternative for these tugs exists. The Government's decision to withdraw funding for the ETVs is unwise and short-sighted - quite literally, it is inviting disaster," says Louise Ellman.

The Transport Committee also criticises proposals to completely remove government funding for the Maritime Incident Response group (MIRG), a national fire-fighting-at-sea capability. Ministers should instead adopt a slimmed-down MIRG which is more cost-effective than the present arrangement.

Lastly, the committee records its disappointment that Mike Penning MP, Minister for Shipping, instructed regular coastguards not to give oral evidence to the committee on the basis that they were junior civil servants.

"The minister should have shown more faith in the professionalism of the coastguards and stuck by his original commitment to the House [of Commons] to let them give evidence to the Committee," adds Louise Ellman.

Louise Ellman presented the Report on the floor of the House of Commons [12m 30s in] on Thursday 23 June.
Posted by Nevin at 11:30 am

Tony Stewart is no longer with us but his reflections on our history are always worth a re-read. We seem to drop into the familiar tramlines of history with monotonous and often deadly regularity.

"To people whose history stays flat on the printed page it seems incredible that 'old, far-off, unhappy things, and battles long ago' should exert such influence upon the present. Ireland, like Dracula's Transylvania, is much troubled by the undead. King William III, Wolfe Tone and Patrick Pearse sustain an unnatural immortality with the blood of succeeding generations, and when people talk about the inability of the Irish to forget the past, this is usually what they mean. As a matter of fact, the Irish are not only capable of forgetting the past, but quite deliberately expunge from their minds whole areas of it. Like other nations, they have woven for themselves a garment of myth and legend which they call Irish history... that is the history they learn at their mother's knee, in school, in books and plays, on radio and television, in songs and ballads... To the Irish all History is Applied History and the past is simply a convenient quarry which provides ammunition to use against enemies in the present."

Some of the patterns of conflict repeat themselves but those who have to deal with the problems now also have to contend with the impact of new media: mobile phone, Twitter, Bebo and Facebook. These have the capacity both to inflame passions and to lead to greater cross-community understanding. The losers will still mainly be those who live in the historical hotspots.
Posted by Nevin at 9:44 am

Would You Adam and Eve It?
Does Stormont Employ Interns?

Oh Yes, Minister!! Come on in; the water's lovely.

Well, I've recently stumbled on a young American lady amongst my political and media friends on Facebook, the internet social networking site, who is just plumb crazy 'bout - our MLAs and councillors. She's even slipped under the radar of some of our more seasoned journalists and bloggers!

A little deep-dive research - in the interests of political sociology - revealed that there was rather more to the young lady, including the use of more than one name - or less, depending upon your point of view - than her alleged attendance at a Christian university would suggest. Some might think that the escapade is very innocent, a minor distraction for our (mainly male) public servants; others might be concerned that a 'honey-trap' operation is in progress, that the compiler of the Facebook page isn't the young lady in the photographs.

Anyone can be a Facebook member and can post whatever photos and other stuff that appeals to them. Should politicians and journalists (and others) be more discerning in their choice of Facebook friends? I have a broad spectrum of Facebook friends, including politicians and journalists, so I was somewhat surprised to see the names that appeared on Facebook pages labelled 'Nisha *******' and, more recently, 'Mary ******'. The individuals who appear in these webpages may well be unaware that their photos are being used in this way.

Nisha and Mary have now been joined by Reena. They - if it really is they - seem to have a particular interest in Northern Ireland politicians, particularly Unionists, and political journalists. The surnames, in no particular order, are Janka, Parrish and Rankin.
Posted by Nevin at 9:29 pm 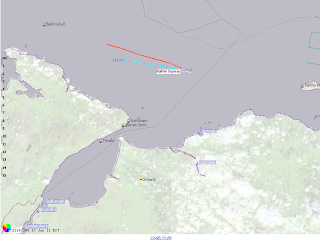 The catamaran appears to have done the morning crossing between Rathlin and Ballycastle. The red path is the vessel going west towards Donegal around 10 am at 16 kts and returning east on the blue path at 8 pm at 13 kts.
Posted by Nevin at 11:55 pm 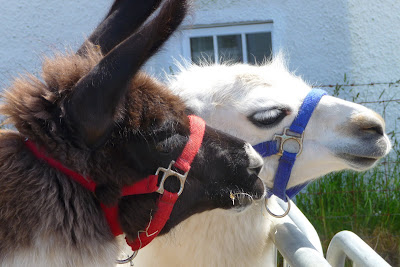 BALLYMONEY & MOYLE TIMES
The annual Mount Druid Vintage Rally will take place on Saturday 11th June at 11am in Ballintoy Rectory grounds on the North Coast on the outskirts of Ballintoy village.

The usual attractions will be all types of vintage machinery, including cars, motorbikes, stationary engines and threshing machine, animals, amusements, live music, bbq, teas and other stalls!

As catering and bric-a-brac stalls are already arranged we do not require other stall holders who are selling similar items.

A great family day out is guaranteed even if you just wish to relax and enjoy the beautiful local scenery. Admission £3 per person and under 12’s go free.

Everyone will receive a warm welcome on the day.

Ballycastle and the Atlantic Salt Trail 2

I've passed the following message on to Danny McGill, our well known and highly respected local historian, and will be contacting Moyle District Councillors and other relevant parties soon. Readers of NALIL blog will already know about the saltwork sites and Danny's history of the associated Colliery Road will appear in the next issue of the Glynns to be published at the end of June.

I'm trying to get back in touch with Danny McGill about Ecosal.

We spoke ages ago when I was working at Lion Salt Works. I left there last year and am now engaged to help set up the Ecosal trail. David Cranstone is working on the sites and survey work. I am concentrating on delivery of the trail and its links to local tourism.

I have established links now for the UK regional routes in Wales, Cheshire and Cumbria. And touched base with sites and people in Hampshire, Isle of Wight, Ayr and Cornwall.

We do not yet have a budget for tourist linkages. But we have a meeting to make proposals for a UK project at the end of June and then again in November.

A common feature between sites is they are predominately set in AONB designated areas and I am looking at this as a co-ordinating theme for tourism. Not least because there is a sustainability fund that we might be able to tap into, and the AONB Managers have contact with each other. There is an annual conference being held in Cornwall in July at which I hope the relevant managers might talk to each other about how they could link the salt sites together between all the AONB sites .

If the salt trail is to work there needs to be local buy in, so support from your organisation, the local museum and AONB team would be a good start.  I know that you are fully supportive but it would help me if you also have any direct contacts to the people I would like support from at the museum and the AONB.

Look forward to hearing back from you.

Renewed effort to convert a public road into a private drive

Whatever happened to the Roads Service assurance that the public road would be retained?

"There have been expansive discussions on the matter with Roads Service and an "in principle" proposal has been achieved on 28 February 2011. It would now be appropriate to table the proposals before Moyle District Council prior to making formal application to Roads Service for the proposal."

Should Roads Service acquiesce in this instance would a precedent be set for other developers and owners who fancy converting a stretch of public road for private use? 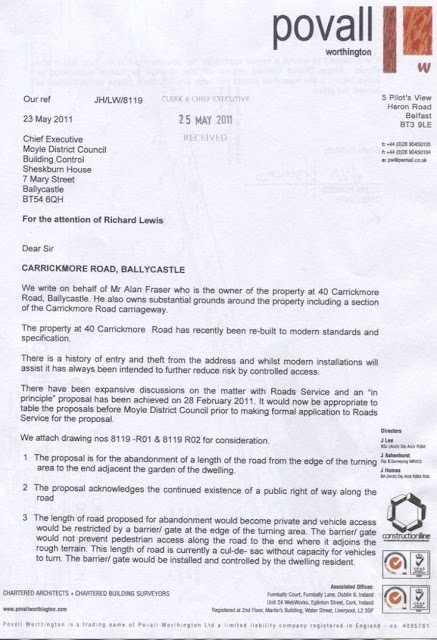 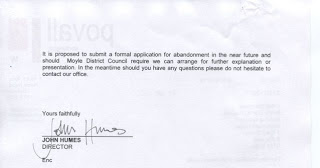 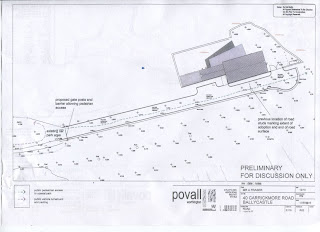 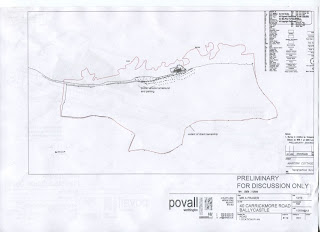 Not Marconi's Cottage - The Sequel

Alterations to Environs of Public Road - no permission sought from NIEA despite environs being part of the Ballycastle Coalfields ASSI.

Celebration Walk - Gates had been removed prior to 1 December 2010 following a Roads Service intervention.

Return of the Tardis - and the BBC

Why would a BBC film crew be present at such a prestigious property and controversial development? Might the property have been entered for the new series of BBC Northern Ireland's "House of the Year" competition?
Posted by Nevin at 10:45 pm