Ballycastle and the Mystery of Coalyard Cottage 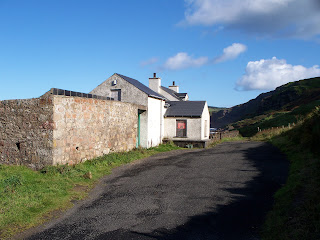 Some months later and two days before Christmas 2008 what appear to be the same plans were nodded through Moyle District Council in a bundle of plans recommended for approval; three days before New Year Coleraine Planning Sub-Office granted official approval. I wonder if the Council has subsequently changed its procedures so that there's no re-occurrence of such a practice. 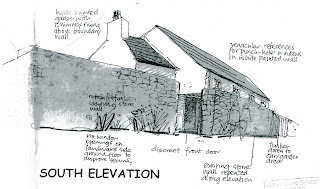 The architectural sketch shows that the existing stone wall on the south side was to have been retained/refurbished yet it was tumbled and a new concrete wall was erected and stone clad instead.

The Northern Ireland Environmental Agency had to intervene when rocks were removed from the foreshore.

According to Coleraine Chronicle, November 25, 2010 a Roads Service representative said: "We have given the builder temporary and courteous approval to make the site safe. He assured me it wouldn't be permanent. I can confirm that as of today (Monday) with further conversations it is his intention to remove the barriers this week". What about the more permanent looking heavy metal gates that straddle this public road? Were they erected and closed before or after the Roads Service gave approval for the road to be blocked? Will they be removed too? [They've been removed] 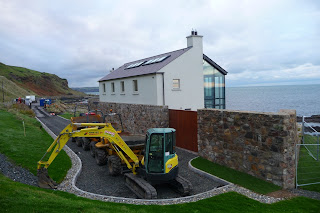 The photo shows that the road has been blocked off at the edge of the garden wall with a landscaped embankment. Was Roads Service approval sought or given? Should a public agency wish to restore part of the old tram track on the Fair Head side to make it a little more accessible for walkers there is now apparently no provision for vehicular access.

There are a series of ancient saltworks on the foreshore alongside Carrickmore Road; one of them is located at the north-east corner of this property. There's a strong possibility that these could form part of the proposed Atlantic Salt Trail and become an additional key tourism feature in Moyle alongside Bushmills Distillery, the Giants Causeway and Carrickarede Rope Bridge. Have Moyle District Council and the Northern Ireland Tourist Board made contingency plans, including access arrangements, to facilitate this prestigious European project?

Where were the guardians of this Area of Special Scientific Interest whilst the above works were in progress?

Access to the countryside is primarily the responsibility of District Councils but I sometimes wonder if Moyle Council is more likely to facilitate restriction of access than to act in the wider public interest. 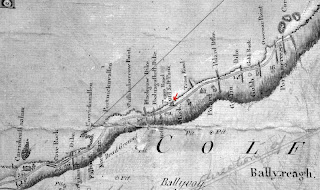 Councils can create new Rights of Way by agreement with owners or by order. I'm told that the road now known as Carrickmore Road was formerly known as Colliery Road and that this accommodation road serving the collieries and saltworks ran at least as far as Carrickmore. It's marked on the 1830s OS and earlier maps. A short part of this road just past Coalyard Cottage/Old Saltpans is covered by a landslip. I'm told that there is at least one style across a fence on the road to Carrickmore. I'm also told that the new landscaping which acts as a barrier on the road has created a significant degree of anger locally.

Will the possibility of Ballycastle being on the prestigious Atlantic Salt Trail be contained in the report to council on December 13? The Council meeting begins at 7 pm. I'm told that one of the saltworks is adjacent to Colliery Road at Carrickmore.

Moyle Council has just forwarded an NIEA response to the alterations:

This office has never received a consent application for this, although planning permission was granted for the redevelopment of the house at 40 Carrickmore Road in 2008 ( Planning Ref: 2006/0256/F ). The house itself is outside Ballycastle Coalfields ASSI, although the designation surrounds it.

The response makes no mention of the action NIEA intends to take with regard to this and related matters, some of which have been recorded in NALIL blog and other places.

The Ballycastle Stuff Facebook link has brought new readers to this story from home and abroad; it also provides an opportunity for a exchange of views on public v private access, vagaries of the planning process, the role of elected representatives and the ability of public agencies to enforce regulations.

Tithe Saoire Chleire Teoranta Accounts for 2001 and 2002. Can Dublin and Belfast civil servants explain why the figures for 2001 are not identical in each for the same accounting year period? Can DCEGA (formerly DCRGA) explain why this discrepancy is not reflected in its endorsement of the ferry operator? Was the detailed scrutiny of these accounts not part of the tendering processes in both Dublin and Belfast? Is Dublin submitting the current tenders for the new Cape Clear contract to rigorous financial and other important checks?
Posted by Nevin at 1:31 pm

Belfast Telegraph: US tycoon who’s paying to make our MLAs smarter
Posted by Nevin at 10:06 am

Around the World in 8 Weeks

Northern Ireland is stunning. We had been blessed with sunny weather making all these outdoor shoots much more enjoyable.  We are staying in Bushmills, which is home to the famous whiskey, so obviously I was hung over this morning. We spent some time checking out old castles and hiking around the cliffs.

Check out Kyle Burton Wheeler's photos from the North Antrim coast including a magnificent aerial view of Ballintoy harbour.

Rathlin and Cape Clear Ferries III - Believe It or Not

The directors of Rathlin Island Ferry Limited (RIFL) continue to have problems with the accuracy of detail on their Antrim and Cork ferry websites:

They surrendered their contract on the Cape Clear route earlier this year and even though the website shows they've since merely operated a summer service the snaphot claims 24/7/364.

"Even some locals were impressed that they could depart at 0645 from North Harbour [Cape Clear] and be in Belfast at 10***."

The first Manx2 flight from Cork Airport arrives in Belfast George Best Airport at 1030 so that rules out air travel. Baltimore to Belfast via Dublin is 322 miles so that means an average road speed of over 100 mph. No doubt An Garda Síochána and the PSNI would be impressed at such a turn of speed too!!

"New Contract is being tenderd for by four companies. It is due to be awarded during November 2010 and the new operator commences on Dec 1st. 2010**."

If the contract is out to tender how would the directors know how many tenderers there are? I can find no mention of this information on the DCEGA website but the Department has released the statement that it issued to RnaG:

The 20 minute Rathlin Express catamaran crossing on the Rathlin route has finally been downgraded to 25 minutes but the actual times are often in the range 30-35 minutes. Shipais.com shows that current speeds are down to around 11-13 knots. Lady Iona, a similarly designed catamaran, achieves speeds of over 20 knots in Scottish waters.

Links on websites are always worth a look. West Cork Islands looks like a public information site but the opening page gives no clues to its ownership; a domain search sheds the following light:

Even though the site was updated on November 16 there's a link on the Cape Clear Island page to the Naomh Ciaran II ferry, now apparently just a summer service, but no mention of the main government subsidised year-round service.

** According to emara News DCEGA has postponed the start of the new 8-year contract until January 1, 2011.

*** The visitors and locals will be equally impressed with the speedy alteration to the website!!

However, according to the Cape Clear Xpress flyer, the first sailing each day is at 10.30, not 06.45. The 24/7/364 claim has also disappeared into the ether. Perhaps the Rathlin Express catamaran crossing time should now be altered from 25 minutes to a more realistic 35 minutes.
Posted by Nevin at 7:57 pm

Letter from Leslie Burke
Hugh McVicker was my great-great grandfather. He was born in 1834 and died Oct.14, 1921. He is buried at Ballyrashane Presbyterian Church. He died at his residence, Ballynaris.

In 1901 he, a stone mason, lived at 8 Ballynarry Lower. His niece Fanny Getty and her infant daughter Annie May lived with him and his 2nd wife Eliza/Elizabeth. In 1911 he lived at 9 Ballylough More, according to the census records. His first wife was Jane Moore. She was born in 1834 and died Dec. 13, 1886 at 52 years of age. She was from Scotland. They had 4 children that I know of.

Annie McVicker was born in 1860 and died April 11, 1935 at 74 years old. She married Henry McCandless who I believe was also from Bushmills and they had 1 son, Walter McCandless. There are references to his family in my grandfathers letters to Sarah.

Sarah McVicker was born Oct. 31, 1867 or 68 and died in 1953 at the age of 84. She came to the US alone on Mar.28, 1883 when she was 16 and lived in Philadelphia. Annie was already here. Sarah married Daniel Connor, whose family is also believed to be from Bushmills, had 5 children and he died. She then married my great-grandfather Joseph William McLean approx. 1900 and had 6 more children.

William McVicker is the only son I don't have info on. Either he or one of his sons ended up in Liverpool, NSW, Australia. We have photos, news clippings and letters from there.

I don't know if Hugh had children with his 2nd wife Elizabeth. She is believed to have been quite a bit younger than him. I don't know when she died either. She sent Hugh's death notice to Sarah. In one of the census records it says there are 9 children. I don't know who they are or if they were Elizabeth's before she married Hugh.


END
If anyone can add to Leslie's knowledge please email NALIL blog at the address on the right panel.
Posted by Nevin at 9:47 pm