The National Trust has applied for a change of use from a shop and an office to toilets adjacent to its Visitor Centre at the Giant's Causeway. 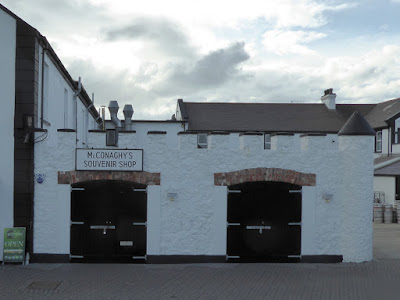 Tommy McConaghy and others have submitted objections to the Planning Service but as far as I know the proposal has yet to be considered by Causeway Coast and Glens Borough Council. Tommy's shop was relocated after the fire in the previous visitor centre. 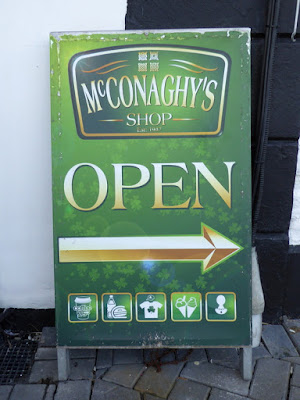 Brian Fillis compiled the following item for the BBC's Your Place and Mine; Dan McConaghy is Tommy's father:

When Dan McConaghy came out of the navy after the war, he and his wife ran one of the eight shops that were along the bottom of the cliffs at the Causeway. These were timber-framed little cabins covered in galvanised iron where visitors could buy postcards, china, rings, etc. Together, Dan and his wife built up a thriving business, but in those austere times souvenirs to sell in the shop were hard to come by, so Dan set to and made his own. Shillelaghs were always a much sought after gift and Dan traveled throughout County Antrim seeking out the high hedges from which to cut the thorns. Then it was back to his workshop at the Aird where he fashioned them into the souvenir we know so well.

One popular trinket which many of the Causeway entrepreneurs used to make, was a little hand carving of one of the local features - the "Wishing Chair". These went around the world in their hundreds as tourists took them home. They were fashioned, not from the Causeway stone, but from a softer rock (Lithomarge). This was found in a nearby area called the Loom but was usually covered by the sea. Dan would dig out this rock then carve it with a penknife. Perhaps you still have one of these ornaments on your mantlepiece? If so please tell us. These pieces are now rare as the National Trust stopped the removal of the rock when they took over the ownership of the area in 1962, The turnstiles and the shops were also removed at that time. The little Causeway shops were visited by many hundreds of tourists from around the world. as Dan reels off the list of coach parties that used to arrive on a daily basis from hotels throughout the province.

Change of use from shop and office to ancillary W.C.facilities including blocking up internal access so thatfacilities are accessed externally only and alterationsto façade to include the replacement of doors with afixed glazed screen with hardwood painted frame. 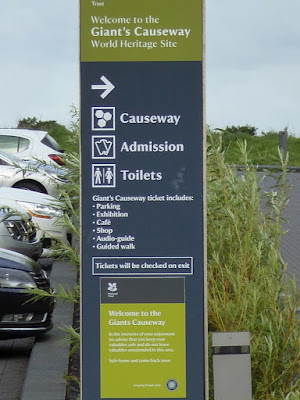 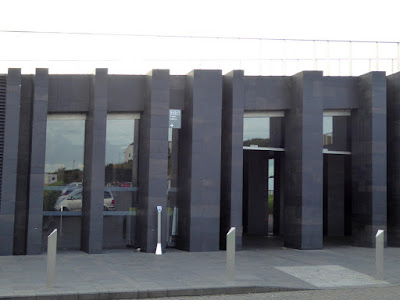 There is a sign for the three free toilets but it's well
above eye level and the print is small.

So far there have been almost 1800 NALIL pageviews and 44 Facebook shares since this blog was posted at 10 pm on July 26. If you wish to make a representation to the Planning Service, either for or against the National Trust proposal, please do do so as soon as possible. It's important that the Planning Service is well informed about the public mood. You can also track the progress of this planning application via the Public Portal.

There are now almost 3200 NALIL page views [9300+ October 17] as well as 67 shares on my Facebook timeline and I've just received a photo of a carved Causeway wishing chair: 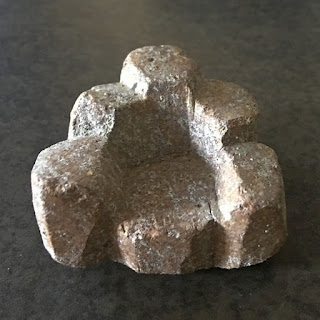 National Trust out of step on Giant's Causeway gift shop

National Trust - "Playing our Part": "The need for new, innovative ways to look after local, everyday historic and beautiful places is a challenge that charities, government, business and communities need to address together."

NT can play its part by allowing and encouraging local businesses to trade on NT premises.
Posted by Nevin at 10:04 pm 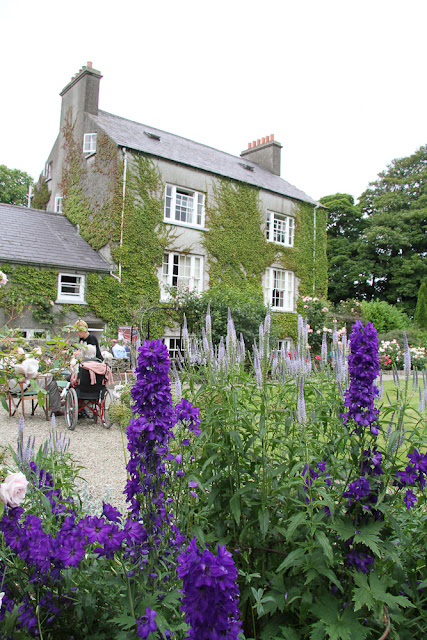 Mr and Mrs D I Page

A mature garden of three acres on an historic site. To the front of the Georgian rectory is a large lawn with mature trees, a small peace garden, an ancient well and a developing woodland garden with a small fernery leading to a secret garden. To the rear of the house is another large lawn with contrasting borders of roses, herbaceous plants and shrubs, as well as an attractive pond area. A wooden rustic fence separates the long herbaceous border from the kitchen garden, with greenhouse, herb, vegetable and fruit gardens. Beyond the lawn is a large old orchard and an experimental area with wildflowers and annuals. Partially suitable for wheelchairs.

From Ballymena take A26 towards Ballymoney. On Ballymoney by-pass go straight on at Kilraughts roundabout and then at Portrush Road roundabout take third exit, BT62 Portrush. Continue on this road, enter Ballybogey and turn right, signposted B67 Ballycastle. Continue on to Derrykeighan and turn left. Continue to Castlecat and turn right, signposted Billy 0.5 mile and then immediately fork left on to Haw Road. Continue to church and park on Haw Road. Garden is on the right on Cabragh Road.

From Coleraine take Ballycastle Road (B67). At T junction turn right and then next left, Benvarden Road. At Derrykeighan turn left, signposted Bushmills and on to Castlecat, from there follow directions as above.

National Trust - Ulster Gardens Scheme
Posted by Nevin at 9:40 am 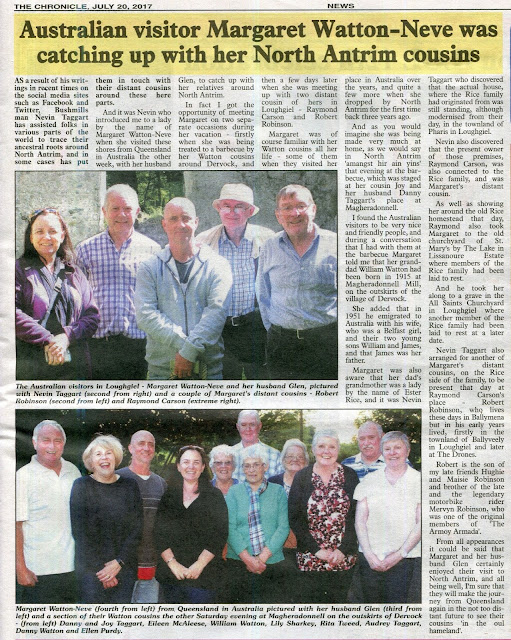 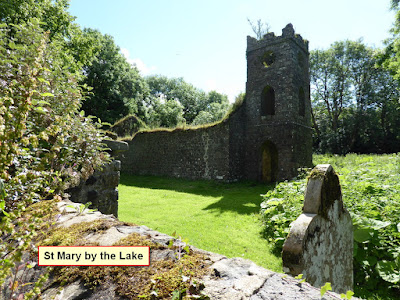 The Ballymena branch of the North of Ireland Family History Society (NIFHS), in conjunction with Family Tree DNA (FTDNA), are hosting a family history and DNA research fair on 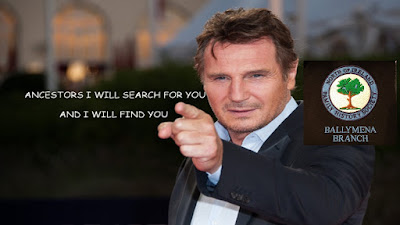 So if you are wishing to start your family tree or you are a more experienced researcher and you have come up against  "Brick Wall", come along and chat to the local representatives from the various groups who will  be taking a stall.

Learn about the advantages of DNA testing and how it can assist in your family history research. DNA test kits will be available for testing on the day or to take away and have another member of your family take the test.

Come along, admission is free and start to learn about your family roots and local history.
Posted by Nevin at 4:22 pm 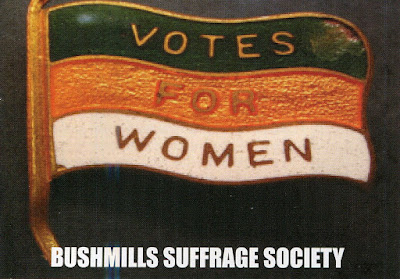 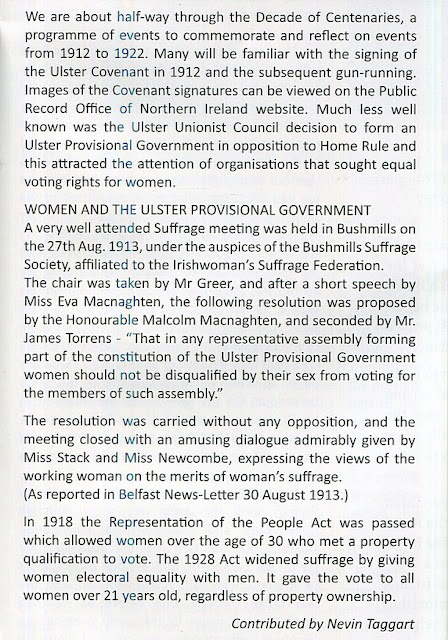 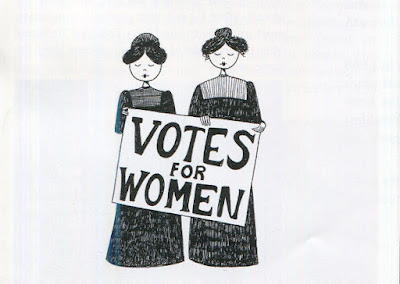