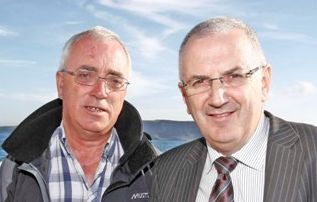 Mr Storey: Has he had any discussions with Rathlin Ferries Ltd about that issue, given that it was in the ombudsman's report back in August 2012?

Mr Kennedy: I am grateful to the Member for his supplementary.  He will realise that this is a somewhat delicate matter and that I am not at liberty to go into substantial detail.  I understand that discussions are ongoing between my Department and the operators, and I hope that we can get the matter resolved.

I received the following brief message from a Stormont MLA on 1 March 2013:


But has it? Has the amount been paid in full? I can see no mention of the issue in the DRD Departmental Board minutes or the DRD Weekly Business Review minutes or in any briefing to the Committee for Regional Development.

Calmac accepted assurances, in an email exchange towards the end of June 2008 involving two DRD officials and a solicitor for the new operator, that the death in service and related provisions were in place.

Why, apparently, did no one from DRD or from the Department of Finance and Personnel check the documentation? Don't they have a responsibility to ensure that TUPE arrangements are adhered to? Have measures now been put in place to prevent a re-occurrence of such an issue?

Why wasn't the issue resolved during the course of the independent investigations in late 2008?

Also, is it satisfied that the operator has adequate procedures and finance in place to provide for pensions, death in service benefits and redundancies as specified in TUPE communications between this operator and the previous one? .. NALIL 18 November 2008

The new operator delayed for four years before accepting responsibility:

10. On 11 June 2012 Stewarts Solicitors belatedly told my office that there was no scheme in place at the time of Mr McCurdy’s death.  They accepted that Rathlin Island Ferry Ltd were liable for four times Mr McCurdy’s FPS, being a total sum of £101,668.  However, they said:
”I regret that my clients are unable to discharge this sum at this time and my instructions are to raise discussions with the deceased’s solicitors in an effort to agree terms of payment." [Ombudsman's report 1 August 2012]

RIFL's abbreviated accounts for the year ending 31 March 2011 were amended in November 2012 yet there is no mention of this significant additional liability, despite the qualification of the accounts:

"There is a material uncertainty which may cast doubt on the company's ability to continue as a going concern. .. At 31 March 2011, the net liabilities are £264,358"

RIFL's abbreviated accounts for the year ending 31 March 2012 refer to a variation to the DRD-RIFL contract which reduced the DRD clawback and returned £91,682 to the RIFL accounts for 2010/11 and an unspecified amount for 2011/12 which enabled the company to make a profit of £34,123. What was the unspecified amount?

I can find no mention of this variation to the contract in the DRD Departmental Board minutes or in the Weekly Business Review minutes. It would seem that an additional £200,000 plus has been handed over to the operators for 2010/12. Was there a stipulation that Mrs McCurdy would be paid in full? Has the Minister apologised to Mrs McCurdy for the distress she's had to endure?


Minister: "I understand that discussions are ongoing"

These words don't convey the impression of a minister in charge of his department. Why didn't he say, "Discussions are ongoing .."? Is this just another example of the Belfast deficit, of poor governance practice?

If the DRD media centre can provide answers to some or all of these queries I'll add them to this blog.
Posted by Nevin at 8:14 pm