The European Small Islands Network (ESIN) was set up in 2001 by island organisations in France, Ireland, Scotland, Denmark, Sweden and Finland. ESIN works to raise awareness of the challenges experienced by Europe's smallest inhabited islands and to promote inter-island co-operation on the subject of sustainable island development. Many of these small remote communities, with populations in their tens and hundreds, are threatened with extinction and are struggling to build a future for the next generation of Island Children.

ESIN's Inter Island Exchange Project has been funded by the INTERREG 111C programme. The three year project began in July 2004 after the initial groundwork had been completed by ESIN's six island member organisations. The objectives of this operation are to promote greater cooperation between small islands in Europe, to share the benefits of islands experience of sustainable development and to influence national, EU regional development policies in favour of small island communities.

Where does Rathlin fit in this network? It's one of the 31 member Irish Islands Federation, a body funded by the Irish Government's Department of Community, Rural and Gaeltacht Affairs. It isn't represented on IIF's board.

Scotland has five councils or other bodies represented on ESIN, the Republic of Ireland two and Northern Ireland none If Argyll and Bute and North Ayrshire can be members of this organisation why isn't Moyle District Council representing Rathlin Island?

Were any Northern Ireland MEPs invited by ESIN to their Brussels Briefing Day in June 2007 or to any subsequent events?

Ballycastle-Rathlin Ferry and the House of Lords

What are written answers?

To ask Her Majesty's Government whether the Maritime and Coastguard Agency this year censured the ferry operator between Ballycastle and Rathlin Island in County Antrim for carrying a fuel tanker along with passengers on the route; and, if so, what form the censure took.

On marine surveyors from the Maritime and Coastguard Agency issued a formal improvement notice to the MV CANNA requiring the training of its crew in the carriage of dangerous goods and observance of its document of compliance.

I'm told that the transportation of combustion engined vehicles alongside dangerous goods was the breach within the International Maritime Dangerous Goods (IMDG) code on this occasion, since operators are allowed to carry a restricted number of passengers with such goods. However, the number permitted will vary from operator to operator, since the restriction is company and not vessel specific.
Lord Laird (Crossbench)

To ask Her Majesty's Government whether the passenger-carrying boat, the Irish-registered MV True Light, has been awarded a licence by the maritime authorities in the United Kingdom; if not, whether it was refused; if so, when; and for what reason.

The Maritime and Coastguard Agency (MCA) has never awarded an operating certificate to the Irish-registered MV "True Light".

When the MV "True Light" applied for a certificate in May 2008 the inspection and certification process by the MCA was stopped when it became clear that the Irish authorities were not prepared to issue an Irish operating certificate for the ship.

Islands of the Welcomes - from Rathlin to Cape Clear

Islands of the Welcomes - from Rathlin to Cape Clear
Publish at Scribd or explore others:
Posted by Nevin at 12:55 pm

The eCatalogue is a fully searchable database containing over one million catalogue entries relating to PRONI’s archives. The eCatalogue is the end result of the electronic catalogue for Northern Ireland (eCATNI) project.
A PRONI archive can range from a single document to many thousands of documents. Each archive has a unique reference number and can be further sub-divided into related areas or topics.
The search facility allows you to find catalogue entries using text, date or PRONI Reference Number searches.
The browse facility allows you to navigate up and down the various levels of a catalogue.
The catalogue entries describe the records held in PRONI. If you want to see the records they relate to firsthand, you will have to visit PRONI. If you are unable to visit PRONI, can someone else do research for me? provides information on other ways to access the records.
Posted by Nevin at 8:54 am

"A Comedy of Errors" - with apologies

Government department 'chastised'
- no one disciplined 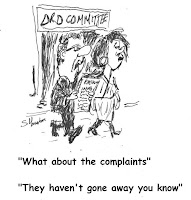 Was there ever any man thus beaten out of season,

When in the why and the wherefore is neither rhyme nor reason?

The Comedy Of Errors
Act 2, scene 2

I think old Will Shakespeare would have made much mischief with the Rathlin ferry contract and the ensuing investigations; he would have sought both rhyme and reason in vain. 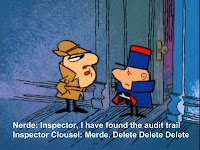 that Official l did not exercise more caution or sensitivity was in our view an error of judgment on his part which should not have happened.

This unqualified 'error of judgement' is on a par with other 'criticisms' contained in RFIR despite the dodgy documents, etc. that have been uncovered by other investigators.

Here are some more exotic qualifiers that have been used in the past: 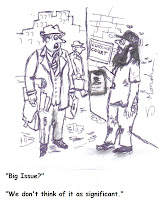 The Taoiseach made an "honest error of judgement" in accepting €50000 from friends, Tánaiste and Minister for Justice Michael McDowell said this evening. ... Irish Times Sept 27, 2006

Clare Short made a "significant error of judgement" over her repeated attacks about the Iraq war ... BBC News Mar 10, 2004

Mr Blair probably believed the intelligence to be accurate, in which case he made a calamitous error of judgement. ... The Independent Feb 1, 2004

"Do you recognise that your career-long dependency on Mr Mandelson has been a monumental error of judgement?" ... William Hague on BBC News Jan 24, 2001

Some may say there has been much ado about nothing but, perhaps, it was also an error of judgement to bury the report, in a non-user friendly format**, on the DRD website just prior to the Christmas recess, without an associated press release.

From the moment I picked up your report until I laid it down, I was convulsed with laughter. Some day I intend reading it.

TRANSLATION: “I didn't think I would get caught.”
Carlsberg obviously don't do excuses...

Has RIFL matched this Caledonian MacBrayne pay rise that staff might have expected under TUPE arrangements? If not, perhaps DRD will make up the difference ...

MV Canna and MV St Sorney passenger certificates. Can anyone spot inconsistencies? If so, please email them to NALIL blog

A planning application - E/2008/0357/F - for new pontoons and access bridges at Ballycastle and Rathlin harbours was received by the Planning Service on 1 December 2008. It is categorised Certificate A in the name of Moyle District Council and dated 19.11.2008; Simon Francis, DFP-CPD- Civil Engineer, is listed as MDC's agent. Was this application authorised by the Council?

Minister repeats bold claims despite the absence of an audit trail. Will there be an explanation given for the 'in-house' process that led to an expenditure of £55,000?

The investigators claim that Calmac made the weakest prequalification (PQQ) submission. Yet the 'evidence' from this FoI request demonstrates that the main part of the PQQ wasn't even scored by the not necessarily independent Evaluation Panel!!

On their reading of the three submissions, the evaluation panel was satisfied that all three bidders met the requirement for the Technical, Legal and Quality criteria and therefore decided, due to the low number of returns, and in the interest of maintaining competition, that prequalification would be pass/fail following the results of the Financial Appraisal.

The following Hoffnung skit reminds me of happy days in London in the late 1960s; it was a favourite of my flatmates at Ealing Common, Alan and Tony.

Transcript
Posted by Nevin at 1:26 pm

DURING the process of stripping top-soil at the quarry owned by Mr. George Peden at Craig Hill, near Bushmills, early in 1954 the workmen partially uncovered a stone-built souterrain together with the fragmentary remains of an associated surface structure.

The site is on the northern slope of the hill a few yards south of the road which branches towards Drumyaran Bridge from the Bushmills-Billy road; it is situated opposite the junction of a side road leading north towards the group of buildings called Turfahun. No indications of an earthwork enclosing the excavated structures can be seen and the first (1833) edition of the O.S. 6 in. map records no feature of this nature. It appears probable, therefore, that the souterrain and associated house comprised an open settlement, lacking the protection of any form of defensive enclosure.