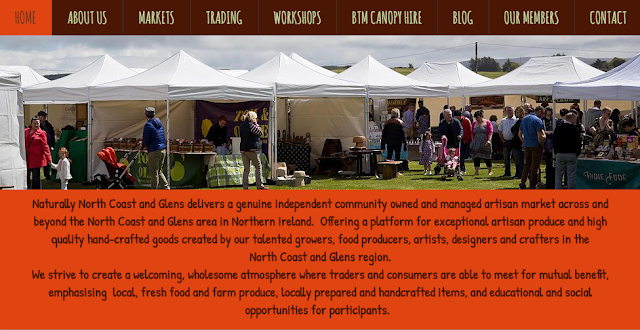 Taste of Ulster - Food NI - Our Food So Good

The Dark Hedges - and the Price of Fame


Niall Gibbons, CEO of Tourism Ireland, said: “TV and film are recognised as strong influencers on travellers everywhere and the huge popularity of Game of Thrones® is a superb opportunity for us to promote Northern Ireland to a huge audience of potential visitors. Our latest film – showcasing numerous filming locations – will encourage fans to come and experience the real Westeros to see the spectacular mountain, lakes and coastline of Northern Ireland and follow in the footsteps of their favourite villains and heroes!” 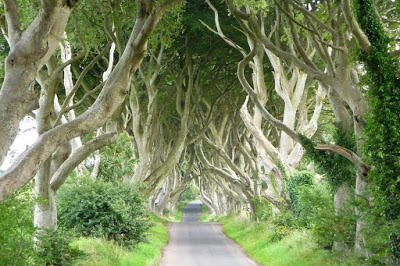 This iconic location has suffered as a consequence of Storm Gertrude, a surfeit of visitors and a failure of officialdom to bring the associated problems under control.

Bob McCallion has given me permission to post his recent photos and observations:

Tourism Ireland, in conjunction with Tourism NI, launched a campaign recently to run from late April to end of June 2016. Their aim is to showcase Northern Ireland to Game of Thrones fans to coincide with the sixth series. Great news for tourism, but when you hear that a lot of the crowds will be directed to the already beleaguered Dark Hedges, "which serves as the backdrop for the Kingsroad - perhaps the most iconic Game of Thrones location in Northern Ireland", alarm bells start ringing!! 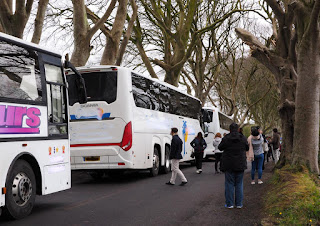 This was the scene on Sun 1st May 2016 - the photos speak for themselves - myself and others have posted similar images last year and the years before that. Until someone takes the 'bull-by-the-horns' and provides proper facilities and parking/safe access for the crowds they will take the easy option and drive/park on the road. 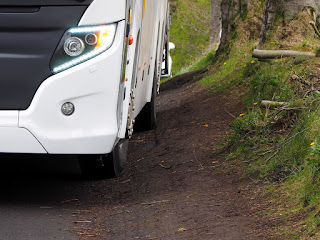 Damage is being done daily, especially by large coaches - some of the verges no longer exist due to irreversible damage to the tree roots from soil compaction. 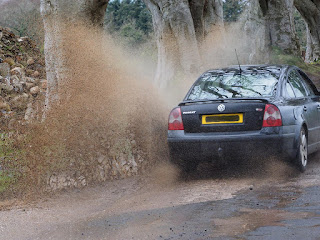 Meanwhile, further up Bregagh Road (aka 'Clabber Street' as it is known locally) the road continues to flood with the trees being pounded by a wall of mud and water, causing further damage to the roots and trunks. Some of the new gullies which were cut last year are now completely blocked. 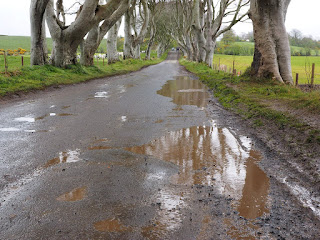 I keep hearing about the "stakeholders" who are keen to act on the plight of the Dark Hedges. What exactly are bodies like the the Dark Hedges Preservation Trust and the Councils doing for the welfare of the trees on a day-to-day basis - are they effectively lobbying the likes of Transport NI and others to stop this terrible destruction? 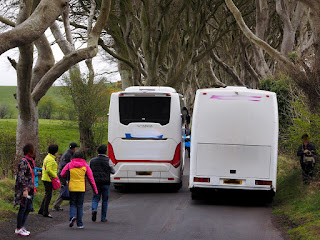 I would also plead with Tourism NI to take the 'high moral ground' and say enough is enough - we do not need any more footfall on the Bregagh Road until the proper strategies are put in place. The current situation quite simply amounts to 'reckless exploitation' of the Dark Hedges - one of Northern Ireland's most beautiful yet vulnerable natural attractions. PLEASE SHARE
Posted by Nevin at 4:52 pm