Act of Duty and of Bravery and Humanity, not of Reconciliation

My attention was caught by the headline 'United Ireland' in a tweet by Irish Times journalist, Ronan McGreevy: 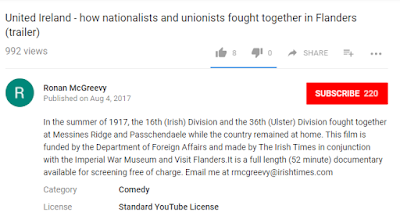 The message was retweeted by the Irish Tánaiste and Minister for Foreign Affairs and Trade, Simon Coveney: 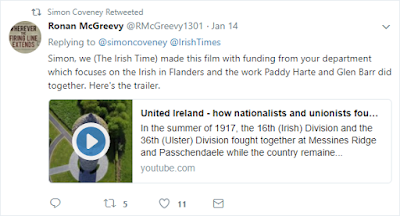 It's quite fair to label John Meeke as an Irishman but to caricature him as an Irish nationalist - 'United Ireland' - is not only wrong, it also does a major disservice to those who have an authentic desire for reconciliation, irrespective of the political context, and it shows a lack of respect for those aspirations identified in the 1998 Agreement.

John was born in Ballyhunsley in 1894, a son of James Meeke and Margaret Sinclair. He signed the Ulster Covenant in Dervock Orange Hall in 1912:

STOOD BY MAJOR REDMOND ON BATTLEFIELD

The death of B Special Constable John Meeke, Benvarden, Dervock, County Antrim, a member of Benvarden L.O.L 1001, recalls a striking instance of individual bravery of the men of the Ulster Division.

Deceased, who was only 28 years at the day of his death, like so many thousands of Ulstermen, went to France with the Ulster Division, and he won the Military Medal for conspicuous bravery in giving first aid under fire to Major Redmond, of the 16th Irish Division.

The Ulsterman stayed beside Major Redmond amidst devastating fire, and did what he could for the wounded Irish officer, though he himself was suffering from a shattered ankle, until a party of the Ulster Division conveying German prisoners came across them and conveyed both officer and man to safety.

Meeke was one of six men for specially dangerous duty with an R.E. officer when the great mine was exploded at Messines on June 7, 1917, and he was severely wounded in October, 1918, by an explosive bullet, which left such terrible injuries that eight operations and a prolonged stay in hospital followed.

Though he never fully recovered his robust health, when the call came for men to defend the Ulster State he joined the Specials, and was attached to Benvarden Platoon.

There was a very large attendance at the funeral, and a firing party of his comrades attended and gave military honours to the remains of a truly brave Ulsterman.

Deceased's brother, Samuel, also gave his life for the Empire. Made a prisoner, he was forced by the brutal Germans to work in the sulphur mines, and this wrecked his health. Though obviously dying, he was kept prisoner until after the Armistice, and passed away within a fortnight of his return home.

Special-Constable Meeke leaves a widow and two infant daughters. Mrs Meeke was injured whilst working in a projectile factory, and three of her brothers were killed in the war.

John was a gardener in Benvardin when he died of pulmonary tuberculosis on the 7th December 1923. He'd married Kathleen/Kate Craig of Ballyrock in Derrykeighan Parish Church, Dervock, on 17th May 1922. As recorded in the newspaper report, three of her brothers perished in the war: Alexander and Samuel on 1st July 1916 and John on 24th March 1918.
Posted by Nevin at 10:46 am


Bush Telegraph on Facebook
Posted by Nevin at 2:34 pm