Ballycastle and a Tesco Store

What are the unknown unknowns?

Council NO Followed By Public Protest
Drama at council over Tesco plans
Ballymoney and Moyle Times
In March Moyle Council split in relation to the application by Tesco to build a store at Leyland Road.
Seven councillors - made up of Sinn Fein and SDLP - voted not to send a letter of support to planners for the Tesco store at that location.
Five other councillors voted to support Tesco and after the vote, DUP councillor Robert McIlroy said it would be interesting to see the reaction of local people to the decision.
Residents stand up for Tesco
News Letter
"I started a petition today calling for Tesco to come to the town and in the space of only five hours I got more than 300 signatures."
Do you want Tesco in Ballycastle?
Facebook
[800 members and now rising more slowly]

Are some Moyle councillors feeling the heat?
Ballycastle Chronicle update

Press Release v News Item
Can you tell the difference?

Buncrana Road, not Leyland Road
Are they related?

Chronicle: People Speak Out
Are opinions from adjoining villages being sought and heard?


Added May 10
It was my impression that an alternative plan for a supermarket site and offices adjacent to Station Road had been lodged with the divisional planning office. However, an official there assures me that it has only been lodged as a query and is not in the process for validation where it could acquire a reference number and become accessible to the public for scrutiny.

I've received an indirect request from Cllr Padraig McShane, in association with his sister and Moyle District Council chair Cllr Cara McShane, for the publication of plans for an alternative site for the supermarket and office buildings in the vicinity of Station Road, Ballycastle. If these plans have yet to be officially registered with the Planning Service I would need an outline map showing the proposed location, access and egress routes and possible Planning Service objections as well as the name of the unnamed developer and proposals for dealing with traffic congestion in the vicinity of the Diamond. All material can be sent to nalilblog@gmail.com [text in TXT format and images in JPG format]

Have the invitations to the public meeting by the end of May been sent out?

Ballycastle and the Atlantic Salt Trail

Click images to enlarge
Will the various salt workings between Ballycastle [pdf file] and Fair Head become part of the Atlantic Salt Trail? That is the great hope and expectation of local historian, Danny McGill.

Prof Mark Brisbane, School of Conservation Sciences, Bournemouth University and David Cranstone of Cranstone Consultants are part of a consortium which sought INTERREG funding for an 'Atlantic Salt Trail' running from Portugal to Scotland. David seems fairly convinced that Ballycastle stands a strong chance of making it onto the Trail.

Work on the project will begin in May and Mark, in correspondence with Danny, has indicated that the plan is to create 'a database (2010 and 2011) and then a heritage trail (2012). The intention is to include both archaeology/history/heritage and ecology, the latter looking into the range of biodiversity that these salt working sites contain and incorporating elements of that into the Trail as well'.

These salt working sites lie within the Ballycastle Coalfields ASSI [pdf file] and so the guardians of our natural, built and industrial heritage will probably now be paying closer attention to construction work being carried out adjacent to one of these ancient industrial sites. The Trail would obviously be an important tourism asset alongside the Giants Causeway World Heritage Site and Carrickarede Rope Bridge.

The construction work is being carried out at Coalyard Cottage, also formerly known as Ca the Coals and Old Salt Pans. The Danny McGill sketch of two piers and a cross pier is based on the location of post holes. 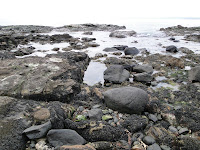 The supply channel carrying sea water into the bucket pot lies just to the right/east of these piers. As you can see, this channel is now partially blocked by boulders. 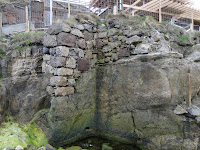 The bucket pot is tucked just underneath the north-east corner of the coalyard site. 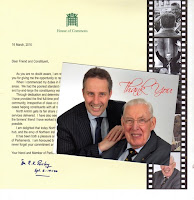 The letter is dated 16 March 2010 yet the envelope is date and time stamped 06.04.10 05:50 pm. Why was there such a delay? Why does Ian jnr make an appearance in the photo? He seems to occupy more of the print than his father does.

Coincidentally, the date of the election was announced some hours prior to the franking of the Paisley thank-you letter.

19 And for me, that utterance may be given unto me, that I may open my mouth boldly, to make known the mystery of the gospel,

20 For which I am an ambassador in bonds: that therein I may speak boldly, as I ought to speak.

I wonder if Ian snr ever saw that bathroom suite in the piggery.

How were recipients of the letter, immediately following the announcement of an election, expected to interpret the enclosed photo, especially when the son, an election candidate, appears to feature more strongly than the father, the retiring MP?

Who paid for this correspondence to the North Antrim electorate? If the money came from public funds to what account was it charged and when?

A commenter on Slugger O'Toole ponders: "That could play havoc with their election budgets if it was not included! In fact it could render Junior ineligible to take a seat if he won and the budget was exceeded. Interesting to watch how this will play."

A visit to the DUP local advice centres' webpage highlights two other curious features. The sticker on the thank-you letter envelope carries the contact address of Ian jnr, not Ian snr, and clicking on the link to Ian snr's constituency website takes you instead to the European Institute of Protestant Studies. The DUP's Limavady office contains the name of an MP and an MLA, not so the Ballymena office. 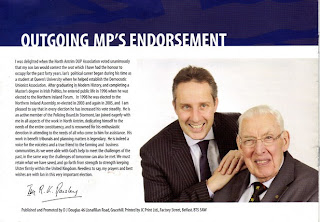 The exhibition will be held in Dunluce Parish Centre, Priestland Road, Bushmills

I know of only one house in Carnfishin in the townland of Ballyhemlin and about one mile south-east of Bushmills. Its modern address is 30 Haw Road.

Click GeoHub NI link and register to use - it's free

Click on 30 Haw Road, Ballyhemlin and you're there
Posted by Nevin at 8:46 pm

The Henrys of Ulster in Ulster Heritage Magazine.
Another variant in North-East Ulster is McKendry.

View from Fair Head
Posted by Nevin at 9:12 pm

'Marconi's Cottage' and Some PR History

Where are the guardians of our natural and built heritage?

Some other history from Moyle Council minutes re. planning application for a new dwelling at 40 Carrickmore Road, Ballycastle:

Ms McMath stated that there were no objections to the above eight applications, they were recommended for approval .. 22 December 2008

What led to the Planning Service's strong objections being swept away? Why did Moyle Council not query this unusual state of affairs?
Posted by Nevin at 5:55 pm