‘Back to Uncertainty: Considering Other Possibilities’
"In its eighth year in the welcoming surroundings of The Market Place Theatre in Armagh, the John Hewitt International Summer School will offer yet another attractive and stimulating programme of events – readings, talks, workshops, discussions, exhibitions and outstanding evening entertainment - something for everyone!

An impressive line-up of writers and performers will join esteemed visiting speakers who will address the challenges of history and identity suggested by this year’s theme, which drew its inspiration from the poem Hand Over Hand [1967] by the celebrated Northern poet and political thinker, John Hewitt:


This billowing freedom threatens to

Smother me with euphoria.

Hand over hand eagerly I crawl

Back to uncertainty.
In a society as deeply separated in its perceptions of identities and symbols as Northern Ireland, Hewitt appreciated that the certainties of one group were challenged directly by those of the other. So, he welcomed ‘uncertainty’ as a stance between two traditions, where he could appreciate both the Protestant culture of his birth and that of his Catholic neighbours.

As a political thinker, Hewitt was describing what is, perhaps, the only meaningful way of coping with deep differences. Rather than denying them, or elevating one identity or version of the truth above all others, he recognised success in politics as the capacity to bridge differences. To achieve this requires the starting point of ‘uncertainty’, which opens the door to imagining the ‘other’ and their place.

So come along to The Market Place Theatre at the end of July for a week, for a day or for an individual event or two and be stimulated, challenged and entertained! There is one certainty - you will be more than welcome!"

We are committed to ensuring that the website is as accessible as possible to all... ABC website

Antrim Borough Council has recently been experiencing a rather embarrassing problem.

Hundreds of extraneous pages had been attached to its website and they'd gone unnoticed, apparently, by its IT department. I think it's most unlikely that ABC would have used such pages as a ploy to attract readers to its website. The image was recorded by Google on July 11.

I spotted the story on Slugger O'Toole and passed it on to ABC. The pages have now been disconnected from the website but can still be viewed in Google cache. Perhaps other councils ought to examine the security of their websites.
Posted by Nevin at 6:31 pm 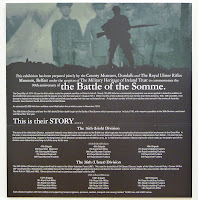 [Click images to enlarge]
More photos on Picasaweb
Posted by Nevin at 11:41 pm 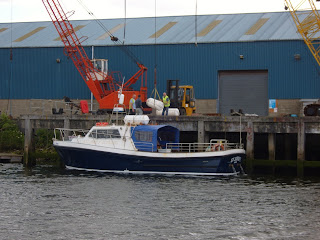 The St Sorney has recently spent some time in Coleraine, apparently in a shed in the Coleraine Harbour Yard. I'm told that some of the people working on the quay are Coleraine Harbour employees. I'm also told that Pat McKeegan, Coleraine Harbour Master and Commissioner, is also the Rathlin Island Ferry Limited (RIFL) Designated Person Ashore (DPA).
The St Sorney is supposedly leased to RIFL by Ciaran O Driscoll, a RIFL director, but it's been a bit of a puzzle as to why this St Sorney Passenger Certificate issued by the Maritime and Coastguard Agency (MCA) has a different format from another MCA certificate issued to the Canna which also operates the Ballycastle-Rathlin route.
MCA and the DPA play different roles in the safe operation of the ferries but the St Sorney has now disappeared from the local radar. There was also no sign of the RIFL directors when I dropped into the ferry terminal today, just two booking clerks. Is it possible that the directors were doing a little bit of flyposting in Baltimore, Co Cork yesterday? I've been sent scans of two flyers that were lodged under a windscreen wiper in the Co Cork harbour town. The unnamed vessel in the first flyer is the St Sorney, a vessel formerly in the possession of the colourful John Joe Fitpatrick. I think it's unlikely that topless barmaids will be appearing in Cape Clear or Rathlin any time soon!! 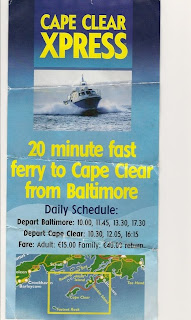 I dare say the Department for Regional Development will be able to provide the name of the new fast ferry that is providing relief cover for the much troubled Rathlin Express catamaran. The St Sorney has provided cover for the numerous occasions when the catamaran was off station; it also got a lot closer to the advertised 20 mins crossing time than the catamaran - the latter often appears to take 30-35 minutes. It will be interesting to see how the Cape Clear sailing times compare with those of the Irish state subsidised service. A departure time shortly in advance might well be labelled cherry-picking. The RIFL online booking system has been 'temporarily' unavailable for weeks whereas the Cailin Or service online booking service is available for those who like such convenience. 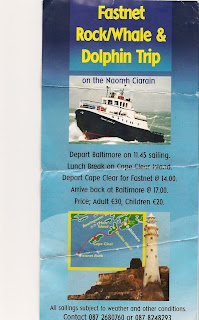 The RIFL directors threw up the Cape Clear subsidised contract back at the end of February this year - where they used the vessel in the second flyer - so the Irish state authorities might consider revisiting that episode and the related financial accounts.
Is it significant that the St Sorney name isn't boldly displayed on the first flyer like the Naomh Ciarain on the second?
Added July 18 [amended]
Some more news has reached me from Baltimore, Co Cork, as well as details of a curious raffle. It's alleged that these past three days Ciaran O Driscoll left his vessels tied up in the harbour in a manner that made it very difficult for passengers to disembark from other ferries.and for the crews to unload diving gear and other equipment. Tidal conditions also meant that one of the other ferries was unnecessarily delayed by fifteen minutes on one of the Friday sailings. This is most likely a breach of local harbour bye-laws so the harbour master will probably have to intervene.
Added July 19 - Pier Pressure
I'm informed that there will be an open meeting of Baltimore Harbour Board and skippers operating in Baltimore harbour called for this evening to see what action can be taken to maintain proper access to harbour facilities.
Added July 20 - Pier Pressure 2
This story has generated more than the usual interest in Dublin circles. Perhaps an Irish state department is now reflecting on its relationship with Tithe Saoire Chléire Teo now that the latter finds that the boot is on the other foot.

The website has been updated but the St Sorney name, er, isn't mentioned!

Reports from Cape Clear indicate that the St Sorney has limped into harbour on one engine after failing to turn up for the 10.30 sailing from Baltimore. The St Sorney has had a recurring history of engine problems since it first appeared in NALIL blog just over two years ago
Posted by Nevin at 7:25 pm 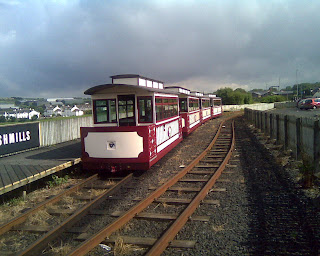 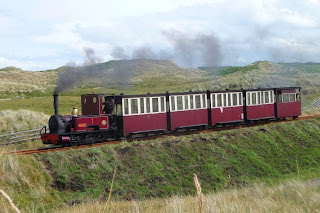 Engine No 1 and old carriages passing a scorched embankment - July 11, 2010 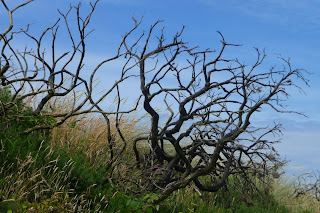 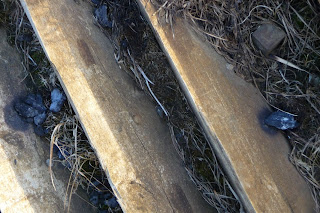 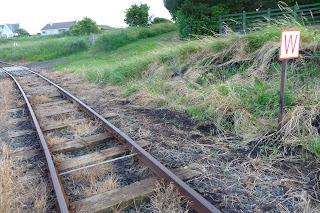 Scene of July 2009 derailment near Bushmills terminus - July 4, 2010. Whatever happened to the HSENI report?
Note scoring of sleepers by bogie wheels and the strengthening bars which were added some days after the accident.
Track-side Fires 2008
Posted by Nevin at 12:59 am 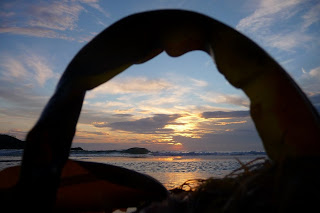 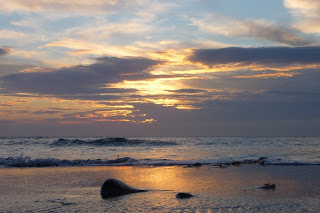 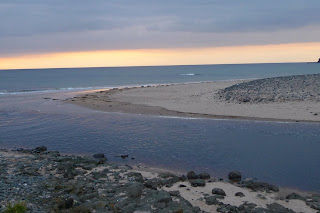 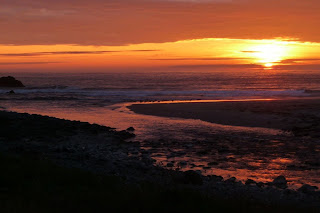 [click images to enlarge]
More
Posted by Nevin at 11:30 pm 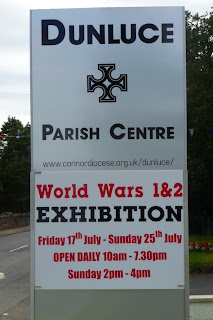 Amanda Moreno, head of collections at the Royal Irish Fusiliers Museum in Armagh, Keith Beattie of Ballymoney Museum and Roamer of the News Letter will speak at the opening of the exhibition on Saturday.

Robert Thompson has obtained photos of each headstone and some details of what happened to the ships. He's now looking for additional information about the sailors' families.

Bushmills on the Twelfth 2010 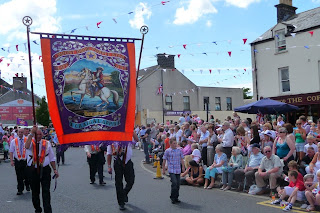 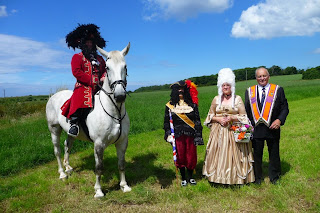 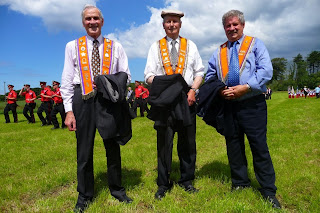 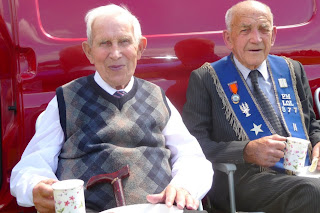 [click images to enlarge]
Picasaweb Album and Slideshow
Posted by Nevin at 7:04 pm

[click images to enlarge]
[thanks to NALIL's Karen in NZ]


Jane Saunders Macnaghten: The fisherman was Sam Doherty, one of the salmon fishermen. My husband was told by his grandfather, Malcolm Macnaghten, that Sam had a glass eye which rotated when he was drunk. Malcolm's father, Edward, who was a Law Lord noticed the eye rotating and said "Sam, you're drunk", to which Sam replied "My Lord, you should never judge by appearances". Edward was Florence's father and builder of Runkerry House.
Posted by Nevin at 1:25 pm

Permanent Secretary with a nose for problems 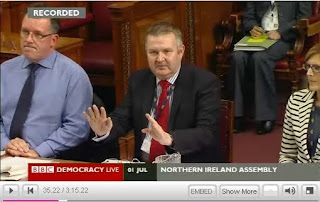 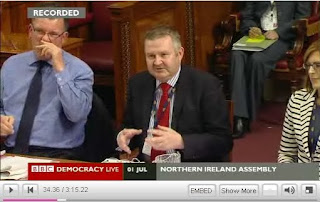 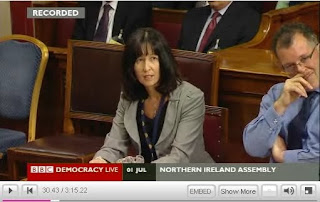 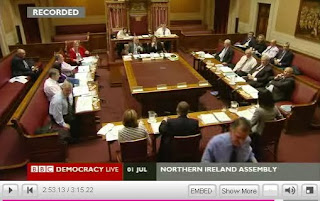 "Can I have a comfort break?"
More snapshots from the Democracy Live archive.

Touching oneself, especially on the nose, mouth or eyes, is especially significant, as it points to a certain emotional difficulty. Such signs may relate to a sense of embarrassment, mental discomfort or tension that an individual feels when he lies. Sometimes self-touching may be an attempt at self-encouragement and support.
The Permanent Secretary certainly looked like a man in need of support but these gestures might cast doubt on some of the answers being given by the witnesses to the members of the Public Accounts Committee. The allegation that sacked members of the Northern Ireland Water Board were victims of a show trial did little to ease the tension of the proceedings.

NI  Water is, allegedly, a Centre of Procurement Expertise (CoPE)


These procurement organisations are granted CoPE status by the Procurement Board following a third-party accreditation exercise that assesses the extent to which CoPEs meet high standards of good practice.
Perhaps this third party needs to face the Public Accounts Committee too!

Perhaps the effects of this exchange at a PAC meeting with NI Water on June 25 [pdf file] were still hanging in the air:

"Mr Dallat: That probably suggests that it should not be possible to put a carpet or cuddly toy in the sewer in the first place.
Mr MacKenzie: People lift manhole covers and put those things down.
Mr Dallat: That is disgusting."

Transcription of Dixon letter to PAC chairman
Posted by Nevin at 12:02 am