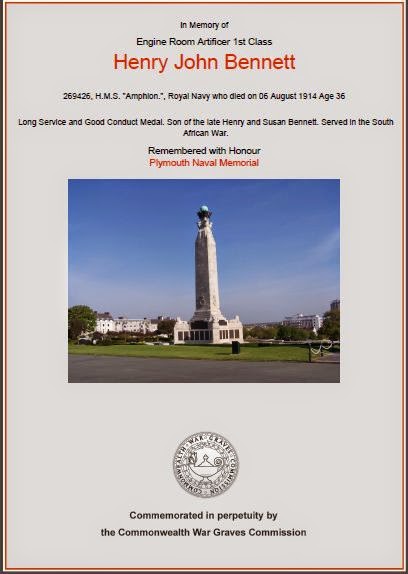 At 06.45 on 6th August, the Amphion struck a mine which exploded and broke the ship’s back.Abandon Ship was ordered. As most of Amphion’s boats were destroyed, the destroyers sent their boats to rescue the crew.  However, although Amphions’s engines were stopped, she continued turning in a circle and she struck the same row of mines.  Her magazine detonated and the destroyers were showered with debris.  Amphion sank at 07.05 and 151 men were lost.

With the war only 32 hours old, HMS Amphion, which had primarily assisted in inflicting the first German Naval loss of the war, became the first British Naval war loss. .. History Hub Ulster 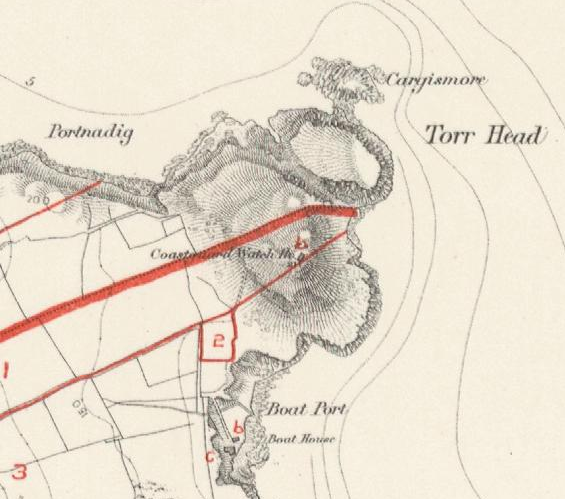 According to his birth certificate, Henry John Bennett was born at Torr in the parish of Culfeightrin on August 25, 1877. His father Henry was a boatman in the coastguard service and his mother was Susan nee Pengalley; both parents were natives of Devon. At the time of the 1911 census, both

parents are living in Plymouth with daughter Rose, have been married for 39 years and had ten children of whom four were still living; Henry by that time was a naval pensioner. Four, at least, of the children - Henry John, Alfred Elias, Alice Louisa and Lillie - were born at Torr but Alice Louisa passed away there, aged just 15 months. The parents and two daughters, Lillie and Rosie, were in Langton Herring in Dorset in 1901. 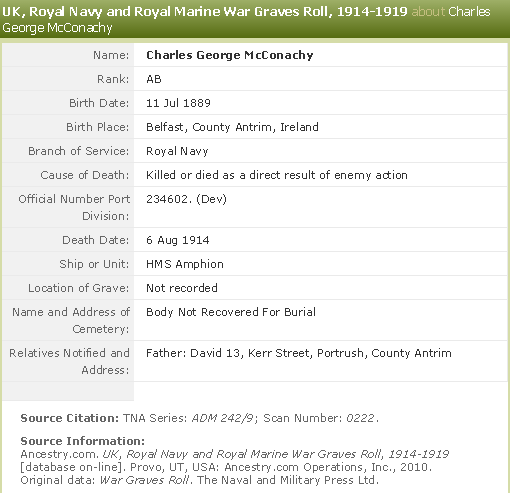 George Charles McConachy was another Antrim man who perished aboard the Amphion. His parents were both from the Dungiven district; he was born in Belfast; his mother died when he was only about six; the family are in Ballymena in 1901 and his father David's contact address at the time of his son's death was 13 Kerr Street, Portrush.
Posted by Nevin at 9:51 am 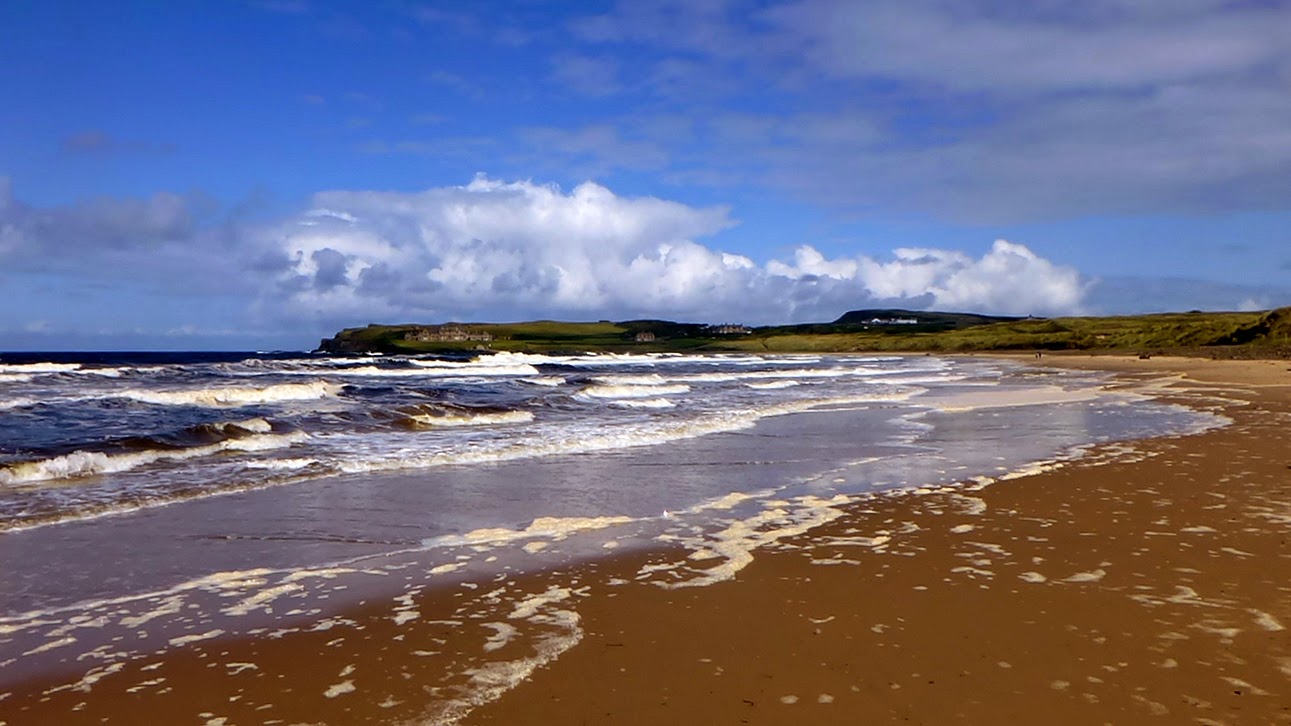 A great afternoon for a stroll along Bushfoot and Blackrock Strands
- strands that link Portballintrae to the Runkerry headland. 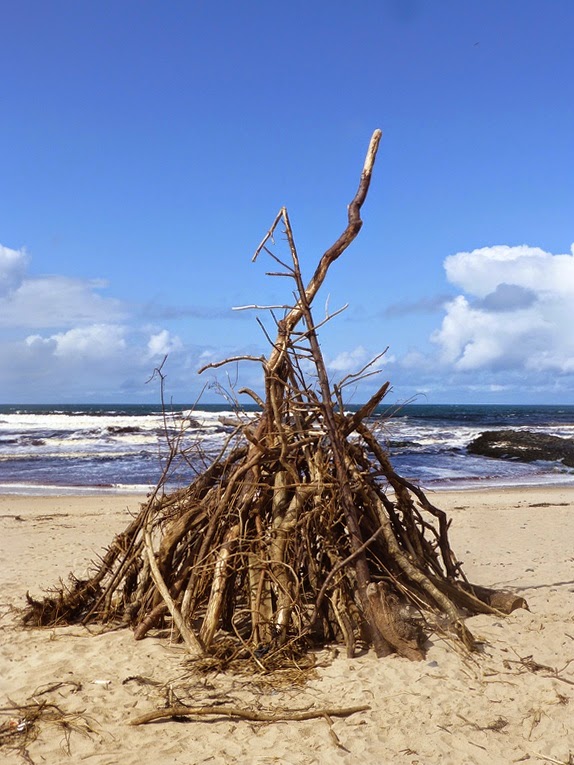 A piece of construction art. 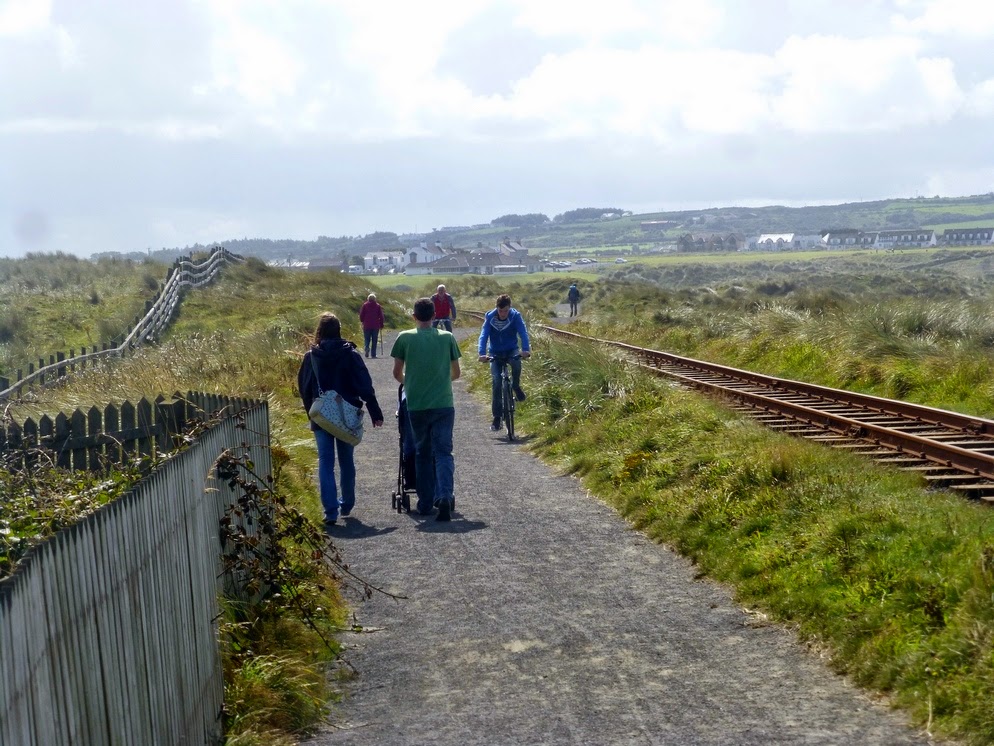 A popular but inadequately signed path beside the tram-track
that links Bushmills and the Giants Causeway. 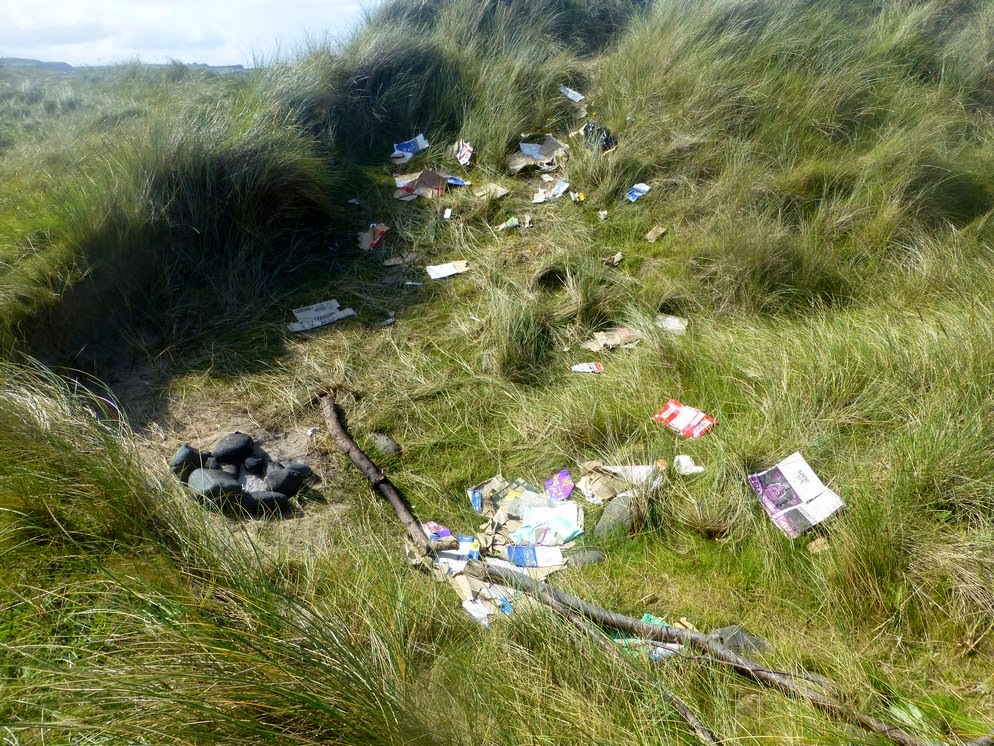 Some hallions' idea of a good time. 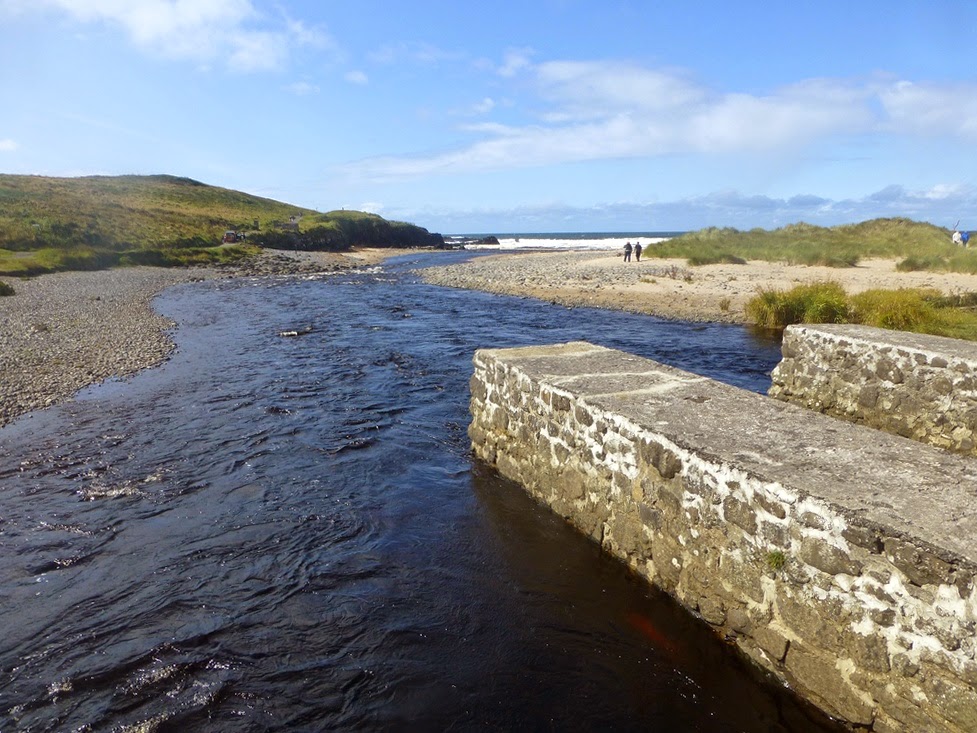 View from the Three-quarter Bridge over the Bush Water. 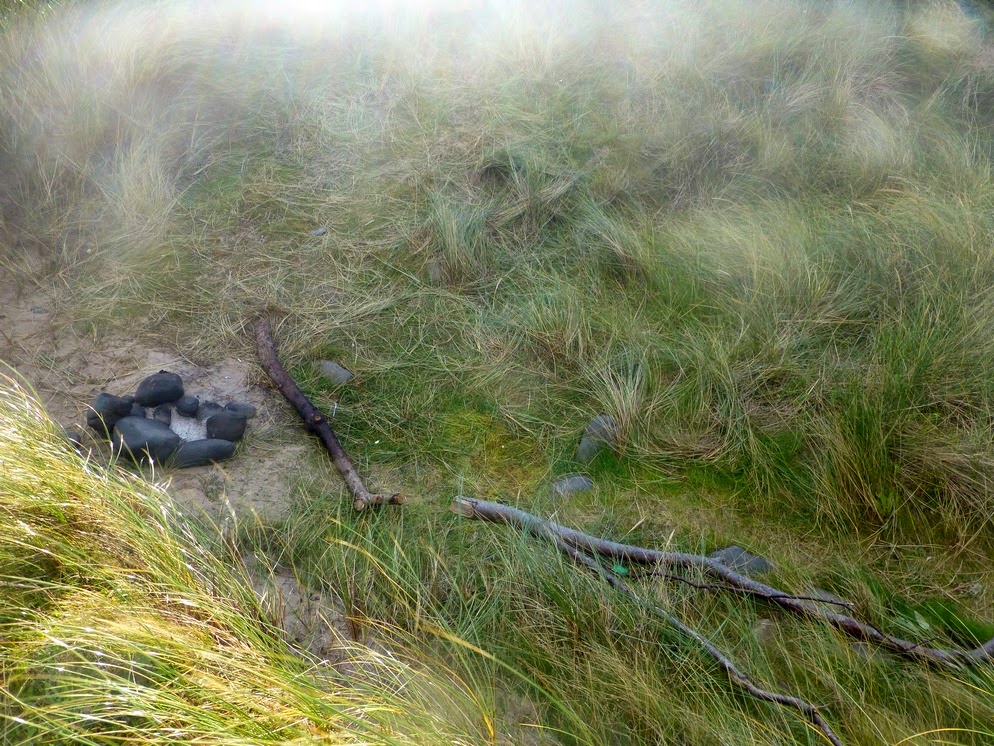 "Your Heritage Needs You" - BUT

Minister Durkan, speaking at a special NIEA-organised First World War commemoration event at Grey Point Fort, Helen’s Bay, said: “Today, 100 years on from the outbreak of the First World War, many of us will have a renewed interest and appreciation of those events. With this interest and appreciation, I hope there will also be greater understanding of the events at that time, many of which have shaped the lives of our families over the past hundred years. It is therefore fitting that I am today launching Phase 2 of the Defence Heritage Project at a state care monument with direct connections to that time. Central to the project is the participation of the wider public, working with my Department, to find, record and share the defence heritage structures across our landscape. 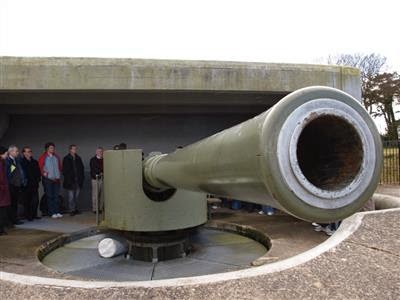 “These sites have direct, and often poignant, connections to past generations, whose lives were shaped and affected by conflicts that engulfed Europe. Through public participation I hope there will be greater awareness of the rich legacy of heritage features that still survive, helping us understand the times past and protect them for future generations.” ..

NIEA is now seeking more volunteers to help record and further update the Defence Heritage Record. In particular, those features from the early twentieth century that have yet to be surveyed. .. DOE Press Release, Monday, August 4, 2014

Curiously enough, the press release makes no mention of the long-term and short-term agency staff that are about to be 'fired' - including some of the staff at Grey Point Fort and Dunluce Castle. The department, ironically, is helping to enlarge the pool of potential volunteers.
Posted by Nevin at 11:39 am

The Causeway Coast and Glens Heritage Trust invite you to participate in an initial project meeting for our Townlands, Fieldnames and Feature Names Project of the Causeway Coast Area of Outstanding Natural Beauty and Giants Causeway World Heritage Site which is being led by Quarto Consultants.

The meeting will be held in
Portballintrae Village Hall on
Tuesday 12th August 2014 at 2pm.

This project aims to investigate the connections between the landscape of the Causeway Coast Area of Outstanding Natural Beauty and the townlands, fieldnames and feature names of the area. This information will be presented in a mobile exhibition throughout the area on completion of the project.

If you could confirm your attendance by Friday 8th August by emailing Andrew@ccght.org or calling the CCGHT office on 028 20752100 it would be greatly appreciated. 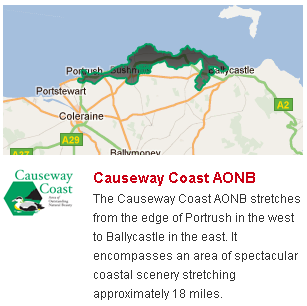 This was the invitation to tender in June 2014 [pdf file] 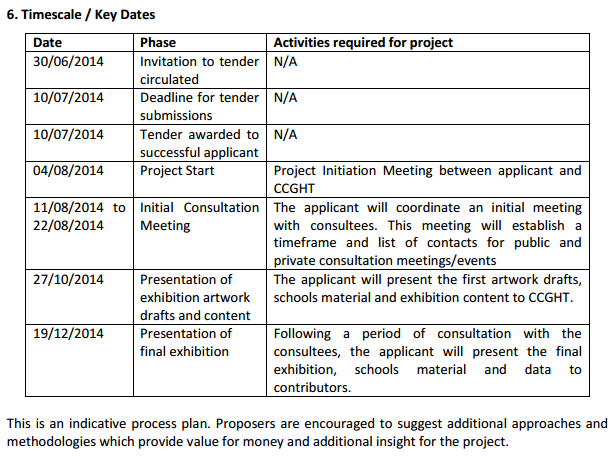 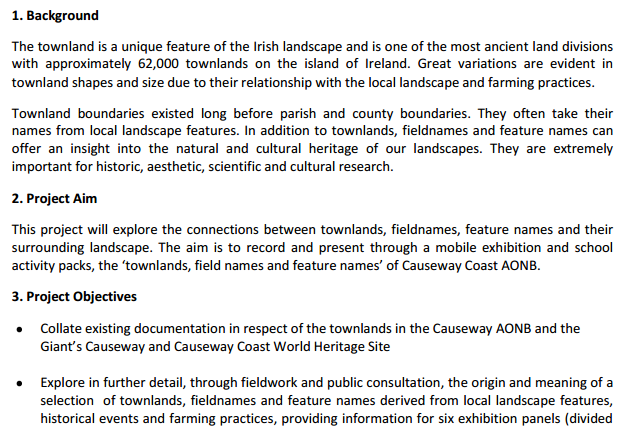 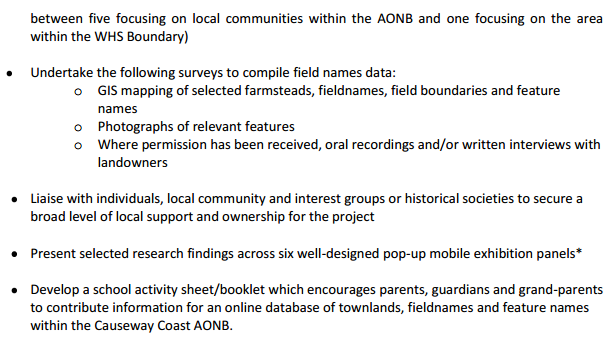 Placenames of Northern Ireland - including some meanings and townland maps. eg Lisserluss

To Frack or Not to Frack - a Perforated Ulster? 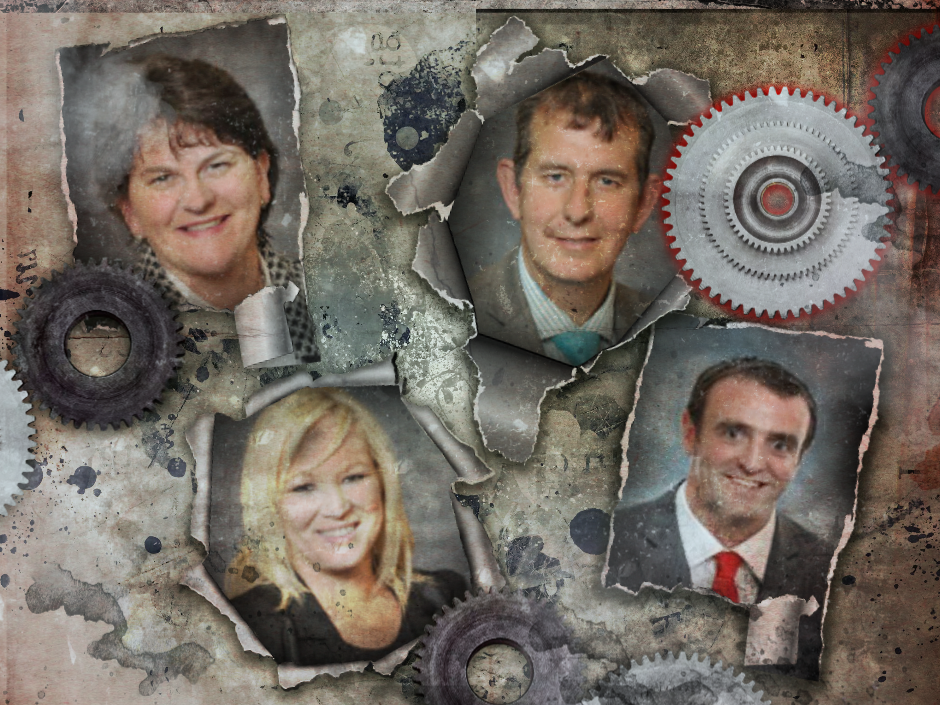 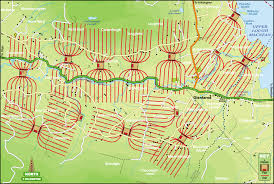 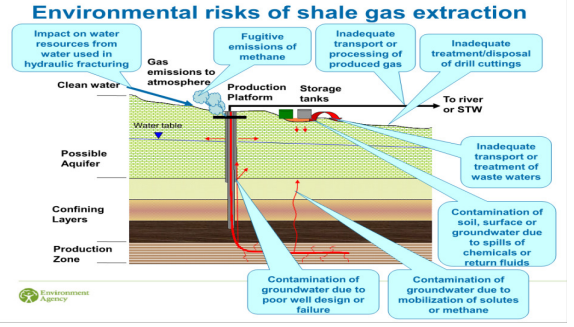 “I have been consistently clear that no fracking will happen on my watch unless there is very strong scientific evidence that it is safe both for public health and the environment. That evidence simply does not exist at this time." .. Mark H Durkan, DOE minister [29 July 2014]

So who will be carrying out the environmental impact assessment? Will it be directed by the drilling companies, by a government department or by an independent agency?

"DETI and other regulators, notably DoE, will undertake detailed scrutiny of any proposals in the context of the rigorous international engineering protocols that are now emerging.

“So we can hardly impose a moratorium on hydraulic fracturing because no permit has yet been issued. Nor is any application expected for 12-18 months. During that period we shall reap the benefit of several in-depth scientific and engineering studies currently in progress, notably in the US.

“Not only might domestic shale gas production help to provide energy independence but it could play a significant role in job creation. I firmly believe that Northern Ireland needs to explore the potential that shale gas offers, to even consider imposing a moratorium at this early stage would reek of a missed opportunity.” .. Arlene Foster, DETI minister. [6 December 2011]

A recent major incident at a fracking site at Clarington, Ohio, USA, should be a clarion call to all four ministers, as well as to the public at large:

"Ohio firefighters battled the blaze for an entire week. Before they managed to fully extinguish it, the fire caused some 30 explosions that rained shrapnel over the surrounding area; 20 trucks on the site caught fire; and tens of thousands of gallons of chemicals -- including a toxic soup of diesel fuel, hydrochloric acid, and ethylene glycol -- mixed with run-off into the nearby creek, killing an estimated 70,000 fish as far as five miles downstream. ..

The preliminary EPA report on the accident in Ohio makes for eye-opening reading. After the fire began on June 28, local, state, and federal officials worked straight through the July 4th holiday to contain the accident but their efforts were hampered by poor inter-agency coordination and a lack of adequate information about the hazards involved. ..

Andrew Rosenberg, director of the Center for Science and Democracy at the Union of Concerned Scientists, says the Ohio case clearly highlights the need for laws across the country to better protect the public. As he puts it, "It is totally unacceptable that claims about trade secrets should be allowed to trump public health and safety."

Have our government departments got measures in place to deal with the issues raised by the Clarington incident, should any of the drilling companies be tempted to operate beyond the limitations specified in the drilling licences?

The big snag with shale wells is that output falls away very quickly indeed after production begins. Compared with “normal” oil and gas wells, where output typically decreases by 7pc-10pc annually, rates of decline for shale wells are dramatically worse. It is by no means unusual for production from each well to fall by 60pc or more in the first 12 months of operations alone.

Faced with such rates of decline, the only way to keep production rates up (and to keep investors on side) is to drill yet more wells. This puts operators on a "drilling treadmill", which should worry local residents just as much as investors. Net cash flow from US shale has been negative year after year, and some of the industry’s biggest names have already walked away.

The seemingly inevitable outcome for the US shale industry is that, once investors wise up, and once the drilling sweet spots have been used, production will slump, probably peaking in 2017-18 and falling precipitously after that. The US is already littered with wells that have been abandoned, often without the site being cleaned up." .. source