Podcast Powered By Podbean
Posted by Nevin at 3:40 pm

From Bushmills to St Louis with Love

Missouri History Museum is currently publishing a collection of love letters from James Edwin Love to his fiancée, Eliza Mary (Molly) Wilson back home in St Louis, Missouri, on the 150th anniversary of the date on each letter. These letters were written during the course of the American Civil War and give a flavour of the events he experienced as well as his feelings for Molly, a native of Islandmagee, near Larne, Co Antrim.. 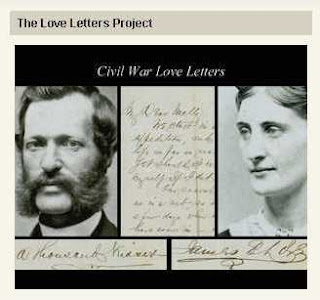 As a child, James lived with his Grandmother Steel at Bushmills, visited his Grandmother Love at the Love homestead outside Derry, and explored the caves and cliffs of the Irish countryside in the region of Ulster, from Larne to Colraine. Many years later, and in another country, James would meet and fall in love with a girl from Larne, Eliza Mary “Molly” Wilson.

According to the Museum archive, James' father William and mother Esther were cousins and they married in 1829; Esther's Bushmills parents were Samuel Steel and Eliza Moore. James was born in Bushmills in1830 and experienced family loss at a very early age; his siblings were born in Ballymena. His father died in 1839 and his mother just three years later in 1842; his sister Mary E. also passed away in 1842, aged 9, and his other sister Jane in 1848, aged 13. James departed for the USA in 1849, aged 20, along with his younger brother Samuel Alexander, aged 12, just as the Irish famine was nearing its end. From the introduction, some uncles and aunts had previously emigrated to the USA.

In May 1849, James and his brother, Samuel, traveled to America, arriving in New York in July. Several of James’s relatives had already come to America, including his aunts and uncles, James and Mary Jane Adams*, and John and Eliza Forsyth, who settled in St. Louis in 1836. Another uncle, Robert A. Love, had settled in Cincinnati in the early 1840s. James and Samuel traveled by boat from New York to Cincinnati, where James lived with his uncle Robert.


MHM Love Letters on Twitter : "Don't miss the next James Love Letter coming January 3! The letters will be more frequent next year when James joins a new regiment". The letters have been archived in reverse order so go to the last page to read the first letter: Civil War Love Letters: June 16, 1861

The answer appears to be yes:

Molly Wilson was born in 1833 on Island Magee, about 50 miles southeast of Bushmills, and moved with her mother to St. Louis about 1850. One of her brothers** married one of Love's cousins. Love and Wilson, both Presbyterians, were engaged shortly before he joined the 5th U.S. Reserve Corps in St. Louis, which was formed to fight rebels in Missouri. ... Tim O'Neil, STL Today

**Perhaps it's this William Wilson in the 1880 US census who is married to Eliza, daughter of James and Jane Adams [see * further up]

Molly Kodner, associate archivist at the Missouri History Museum, explains the background to the collection. 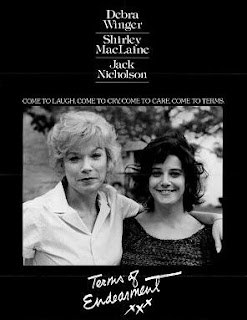 Shopping is more than just an exchange of cash for goods - it's also a social experience. Some might find it overly intimate but I welcome the warmth of 'pet', 'love' and 'darling' across the counter alongside the customary exchanges about the weather or the occasional bit of banter. Long may it continue!!
Posted by Nevin at 11:59 pm 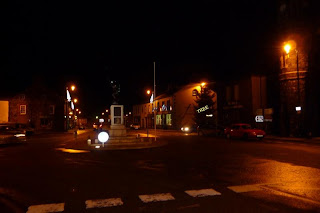 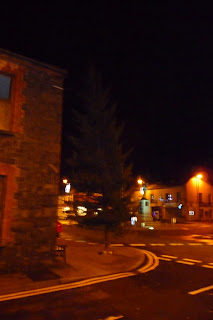 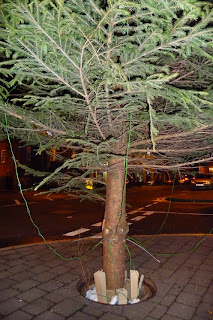 Three photos taken on December 21
Downpatrick splashes out this year. What will Bushmills do next year?
Added December 22 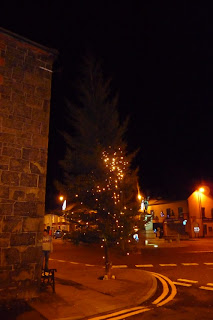 A sprinkling of lights has finally appeared after a week in darkness - and three days before Christmas.
Added December 24 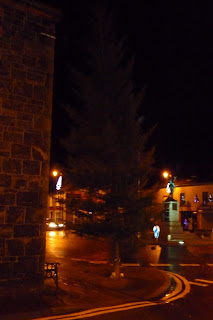 Yes, you've guessed it - the lights have gone out. The Christmas tree at the Diamond in Ballycastle looked almost as pathetic.
Posted by Nevin at 5:25 pm 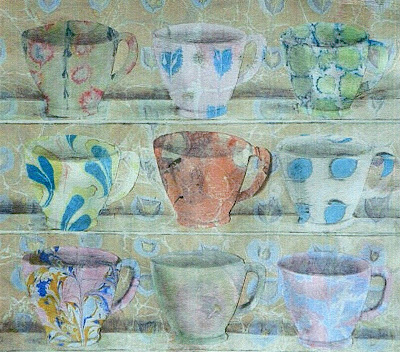 The only way to have a friend is to be one.
Ralph Waldo Emerson
Posted by Nevin at 2:00 am

The Cozies and the Lost Loughsisooly

Return of Loughsisooly?
Posted by Nevin at 10:51 am 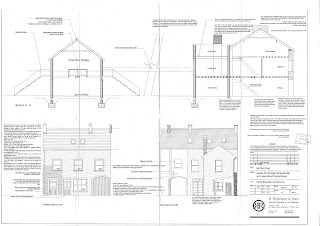 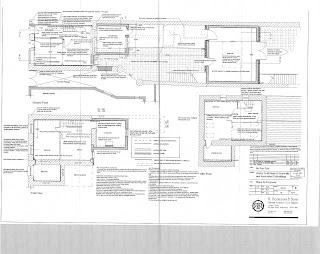 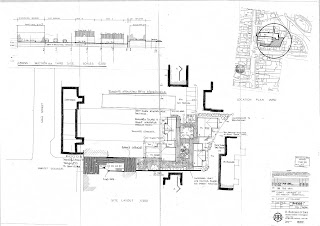 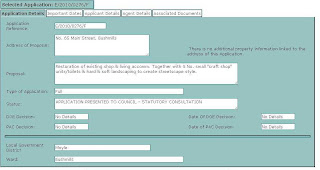 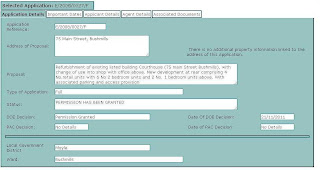 Wallace Craig's Wallaces and Craigs were near neighbours in Castlecat, Co Antrim, about two miles south of Bushmills.

Northern Ireland's first Prime Minister was Sir James Craig but Castlecat produced its own Sir James Craig in the same era. He was a doctor in Dublin who also represented Trinity College in the early Daíls.

"On the other hand there were Fergusons, Wallaces, and with whom there was little amiss. A second cousin of mine, Mrs Craig, (formerly Wallace and whose mother was Laughlin a sister of my grandfather) has a son James Craig MD who has attained an eminence in the medical profession in Dublin. My grandfather, John Laughlin, having only one brother as already stated, and having no son who came to maturity, one can easily understand how the Cluntice Laughlins died out, and the Cosey branch for the same reason."

"The President*: Members of the Dáil will have learned with deep regret of the death of Deputy Sir James Craig, who represented the constituency of Dublin University. Until his health began to fail, Deputy Sir James Craig was constant in his attendance and assiduous in his attention to the work of the House. His keen interest in matters of public health and his work for the improvement of our hospital system demanded the respect of all his colleagues, while his relations with his fellow-Whips and his contribution to our debates were marked by unfailing courtesy. I ask you, a Chinn Comhairle, to convey to Lady Craig and her family an expression of the sympathy of the Dáil with them in their bereavement.

Deputies rose in their places."

* Éamon de Valera was President of the Executive Council of the then Irish Free State in 1933.

Sir James was the son of Johnston Craig and Ellen Wallace and they were married in Bushmills Presbyterian Church on 18 August 1859.

Description : Lease for 20 years, and ?counterpart, William Trail of Ballylough, esq., to Johnston Craig of Castlecatt, farmer, property inCastlecatt in trust for Sarah Reynolds, wife of John Reynolds of Billy or Curramoney, rent to be reduced by half provided no ardent spirits are sold on the premises. (One of two documents)."

Johnston Craig died on 24 December 1893 and a copy of his will can be viewed in PRONI Will Calendars. His widow and Sir James were the two executors. Wallace Craig's grandfather Robert Howard Craig (born 24 May 1870) - who emigrated to St Louis, Missouri, where he sold Irish lace - was Sir James' brother.
Posted by Nevin at 9:09 pm 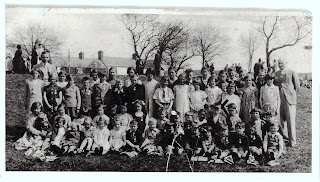 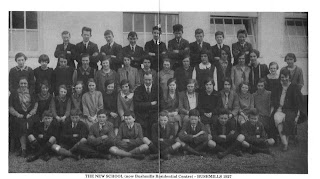 The former Grammar School, also known as ‘The Memorial School’ designed by Clough William-Ellis, was built in 1927 which together with its gates and railings and those fronting Klondyke, is listed.
Posted by Nevin at 7:08 pm

Carry On Up Torr 3

Carry On Up Torr 5 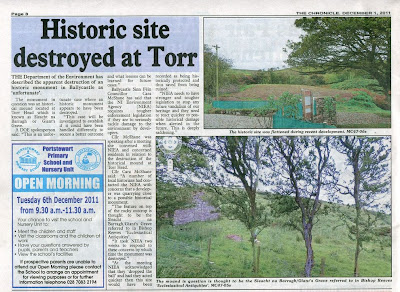 Financial cutbacks and the subsequent reduction in specialised staff (about 17 were released in May 2011) may well mean that even less protection for our heritage will be available in the future. Yet our heritage is an important part of our tourism appeal.

Memorandum of Understanding between CIG and NIEA - 19 April 2011

and some words on the MoU at the time:

Paul Logue (NIEA Archaeologist) added “Heritage is an important part of who we all are and where we come from. It is also an increasingly important part of the economy, attracting tourists from within our island and from abroad. We hope that this agreement will both safeguard heritage and allow us to help the construction and quarrying industries provide much needed investment and employment”.

Paul was informed about quarrying at Torr clachan:

"Your messages about this matter have been passed to me and I intend to visit the area / site tomorrow morning. I have no further details at present than ‘a digger may be sitting on a mound waiting to dig it’. I will try to find out what is occurring and let you know." ... Paul's email 23 August 2011.

"On my visit yesterday I did not observe any digger damage to the children’s burial ground or any other currently recorded archaeological site." ... Paul's email 25 August 2011.

"While we have no definitive evidence to prove that this is a genuine archaeological site without testing we believe there is enough circumstantial evidence to argue its potential." ... CMA archaeologists, 10 August 2011.

Surely the first thing to have done was put an immediate block** on further excavation and resolve the evidence later. The CMA archaeologists had a choice of two mounds in the NIEA records for the townland of East Torr; the one they opted for doesn't fit the farm layout in the Griffith's maps circa 1860.

[* 11. Development at Torr – write to the Enforcement section of the Planning Service detailing quarrying and vandalism in the AONB. Also inform NIEA. (Requested by Councillor P McShane) ... Moyle District Council - agenda for 8 August 2011 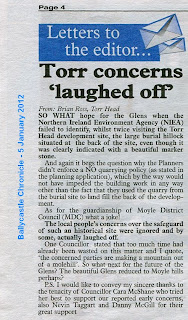 Councillor Cara McShane and other councillors have raised this problem and other site planning issues both at council level and with various government departments and agencies. Sometimes the response is too little; sometimes it is also too late.
Posted by Nevin at 8:59 pm