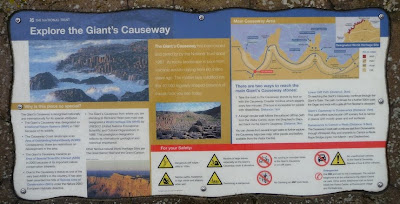 He was speaking at a meeting of Moyle Council where it was agreed legal advice should be sought regarding the terms used as part of an ‘footpath abandonment order’.

Cllr McAllister said it was a “very important” issue and said that the Council was not in the business of abandoning rights of way.

He added: “My concern is if it is shut the public will no longer have the right to tread the stones. It is not just a Moyle issue but a world wide duty we have.” [Source: Ballymoney and Moyle Times online]

Cllr McAllister is to be congratulated for highlighting this rights of way issue, an issue that probably doesn't get the attention it deserves in Northern Ireland. 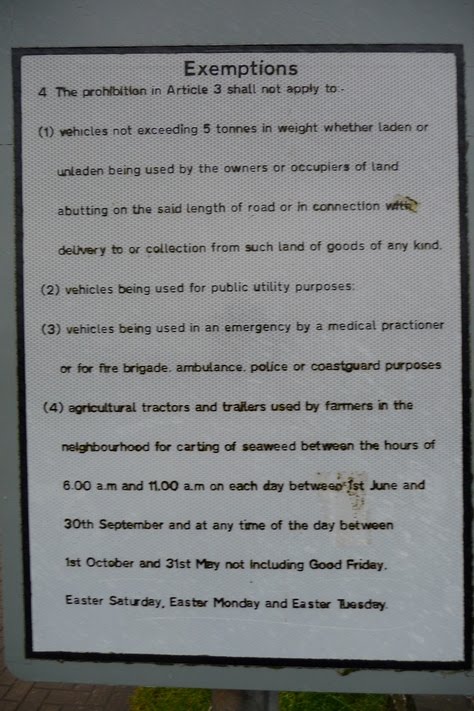 I'm not sure why the Roads Service has placed an Abandonment Order [pdf file] when the 'path' is merely being relocated to its original way through one of the Windy Gaps at the Causeway and that part of the road/path which is being abandoned is that part which goes around the to be demolished visitor's centre containing the cafe. 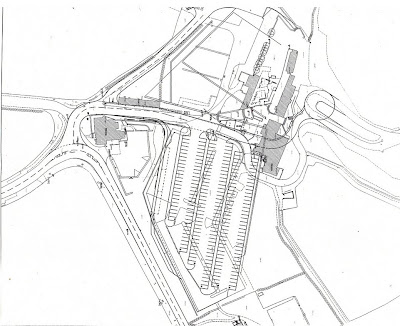 If Cllr McAllister speaks to the Council's Chief Executive he'll find that councils have a duty to assert and map rights of way [pdf file] and they have the power, in association with the Department of the Environment, to divert a path:

• Before making an order the council must be satisfied that it is expedient to divert the path, in the interests of the owner, lessee or occupier of the land crossed by the path or otherwise.
• Before confirming an order the council or Department of the Environment must again be satisfied that it is expedient as set out above.
• The council or Department must further be satisfied that:
- the path will not be substantially less convenient to the public as a consequence of the diversion, and;
- it is expedient to confirm the order having regard to the effect it will have on public enjoyment of the path as a whole or on any other public path, on other land served by the existing path, and on land affected by any proposed new path, taking into account the provisions for compensation.

Moyle DC could have proceeded quite easily along the diversion route as the National Trust would raise no objections. Perhaps it's not too late to exercise this duty.

Perhaps Moyle DC could also publish the maps of public rights of way in its district online for the benefit of those who wish to go a little bit off the beaten track and who also want to ensure that these rights are asserted. I'm assuming, of course, that the Council has been doing its duty!!

Department for Regional Development
Marine Maintenance Supervisor -
Professional Technical Officer (PTO)
IRC29487
I've recently sent some questions to DRD but would also welcome contributions from others via nalilblog@gmail.com
The recent advert for a marine maintenance supervisor on the Strangford ferry service poses questions about other ferry routes which are managed by DRD.
How many personnel are employed in a technical supervisory capacity for the Strangford Ferry?
Are these full time positions?
When was the role of marine maintenance supervisor introduced to this route?
Is there a requirement for comparable roles on all the ferry services under DRD's remit?
If not, please clarify why this is not the case?
Rathlin Ferries Limited engineering and business manager's job on the Rathlin ferry route incorporated the role of technical supervisor. Was this role a DRD requirement?
Did the Rathlin Island Ferry Limited consult DRD prior to making this managerial role redundant?
What was the DRD position on this?
If that position is now being filled, what are the qualifications of the person filling that role?
If the position is not being filled, can DRD clarify why there is a requirement for such positions on the Strangford route but not on the Rathlin route?
Posted by Nevin at 4:48 pm

Freedom of Information Disclosures Have Been Googled II

Some stories just keep running!!
Electronic redaction as used by some Government and other public agencies just isn't working.
I've been able to download FoI released documents in PDF format that have been transferred to the National Archives and to read detail supposedly blanked out. The black band overlay on this detail mysteriously disappears when the document is transformed to text format. Personal details and other stuff are now there for all to see!!
The National Archives will not only need to sort out this problem in their own storage system, they'll also need to contact Google and other search engines to get the material removed from the search engine caches!!
Posted by Nevin at 11:24 am

Over the past few months on the Slugger O'Toole website and elsewhere I've drawn attention to the surfeit of senior officers in the ranks of the Police Service of Northern Ireland (PSNI) and a significant deficit of constables at a time when further moves have been made to dispense with the Full Time Reserve.

Does the new Chief Constable, Matt Baggott, agree or disagree with the statistics provided by the PSNI? Has he played any part in the removal of the Established figures?

Does the Policing Board have a view on the removal of the Established figures* from the monthly statistics or on any of the other points raised in this blog?

[* this link contains Established figures]
Posted by Nevin at 2:56 pm

The place-names of Northern Ireland include those of 6 counties, 60-plus barony and district names, 269 parishes, 9,600 townlands and at least 20,000 other names, in the languages of Irish Gaelic, English and Scots, with a few names in Latin or Old Norse. The gazetteer compiled by the Northern Ireland Place-Name Project is still growing, with current additions including both traditional names of fields and modern streets. There has always been a strong "community relations" aspect to the work, since everyone lives in a place."

The townland can also be located on a map and when you zoom into the map you're also given the option of historic maps from 1830 and 1850. I've noted a problem with the former. It would appear that there is an overlay from another location on the townland I chose to view.

November 2009
Excavations by the Water Service close to the old castle site and across the Diamond from Holy Trinity Church have revealed some interesting discoveries - according to local historian, Danny McGill.

CLICK TO ENLARGE
Read Danny's report on Scribd
Posted by Nevin at 9:24 pm