Last Friday was one of the sunniest days of the summer on the Causeway Coast. While I was awaiting the return of Minister McGimpsey I chanced on preparations for an upcoming TV production.

Usually when you spot Jim Fairbairn and his classic Drophead Bentley he's chauffeuring a bride and groom but this time the driver was actor Brian Milligan and his companion was broadcaster Emma-Louise Johnston. 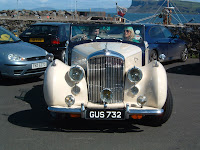 They are appearing in a TV series scheduled for the autumn called "The Fabulous Food Adventure" and Jenny Bristow will be preparing another of her mouth-watering meals. The Co Antrim programme is scheduled for Thursday, October 16, at 7.30pm.

Apparently Morton's supplied the fish so the 'shoot' involved Brian and Emma-Louise driving out from Morton's premises and turning left towards the Ballycastle promenade. If you see Brian waving from the car with Fairhead and Kintyre in the background he's returning my cheeky wave!! 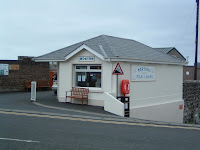 After the shoot Jim, Brian, Emma-Louise and the rest of the squad sat down in the glorious sunshine for a good old helping of Morton's Fish & Chips.
Posted by Nevin at 8:54 pm 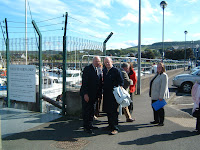 I understand that the Health Minister, Michael McGimpsey, and MLAs, Councillors and officials were members of a 12+ delegation booked on the 11 o'clock fast ferry crossing to Rathlin. The scheduled 35-passenger St Sorney would have been big enough but it seems to have spent much more time out of service than in it. The Causeway Explorer, which is deputising, only has a passenger carrying certificate for 12. 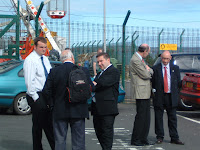 It seems the MLAs and Councillors had not been informed of any change of plan and so they spent the extra hour in the Council offices awaiting the departure of the Canna at noon. There was no sign of the Minister and his officials but it transpired that they had departed in a private rib from the marina.

The delegation returned more or less as it had departed. The ongoing problems of the new ferry service cast a shadow over what will be, hopefully, some good health and related news for Rathlin islanders.

Is this the only recent Government tendering process coming under scrutiny? Apparently not ...

Perhaps it's timely to remind Declan of his own words on another project:

Government finances and the actions of civil servants are legitimate matters for disclosure to the public.

Quite. It's the principle of the thing, Declan. Perhaps you can now encourage the DRD and DFP to hand over the current investigations to the independent NIAO.

An independent investigation would require not just the support and input of Stormont civil servants; it would also need the willing co-operation of all the tenderers and any Ministers, officials and consultants from Belfast, Dublin and Edinburgh who have played a part in the tendering process. Is it possible that under Direct Rule civil servants had too much autonomy and were subject to too little scrutiny? How involved were the DRD and DFP Ministers and to what extent can they be held responsible for decisions taken during their watch?

It would appear that the St Sorney/Sarney has had a chequered history:

FERRY passengers had to be airlifted from the Aran Islands after Department of Marine officials grounded a vessel run by a Co Clare ferry operator.

Aran Islands Fast Ferries was forced to fly nine passengers from Inis Oirr to the mainland on Monday due to the Department grounding the St Sorney after finding "several operational defects" on the boat. Some 26 passengers were temporarily stranded before alternative arrangements were made to bring the passengers back to the mainland by aircraft and ferry.

A company spokesman said the repairs were complete and the company was awaiting inspection to allow sailings resume today.

56/2005
Information regarding complaints received by Chief Surveyor MSO to the effect that passenger vessel St. Sarney had carried passengers with only one engine, and subsequent investigations by Capt. Neil Ford on 24/06/2005, to include the name of the public servant who received the complaint, the details, time and nature of the complaint and the name(s) of the person(s) making the complaint.

Has DRD and MCA checked out all the St Sorney documentation? What about the documentation for the other vessels named in the tendering process? Presumably journalists have submitted the usual FOI requests ...

Similarly, the proposals to take forward the Reform of Public Transport, and to procure and operate short-term passenger and long term Ro-Ro ferries to Rathlin Island, will be screened and subject to EQIA as necessary.

Ah yes, £1.2 million for passenger only ferry to run alongside the Canna and £6.3 million for two ro-ro ferries. There seems to have been little public discussion about these new ferries and DRD seems reluctant to publish the capital spending in its corporate and business plans. Then there's the conundrum of tenderers being told that there would be no capital spending on ferries or on alterations to harbour facilities.

The Committee noted the reduced requirements of some £0.7m Capital Grant arising from a saving made when awarding the new contract to operate the ferry service to Rathlin Island.

Are no members of the DRD committee challenging the contradictions in the Rathlin ferry contract process? If there was to be no capital spend how could there be a saving? If the new operator is to supply the catamaran what happens to the £1.2 million in the DRD Rathlin ferry budget?

There's talk of £150,000(?) being spent on alterations at Rathlin harbour: a new pontoon and deepening of the harbour entrance. Which parties have been privy to these negotiations and which have been left out in the cold?

[to mbogey re. willie vernon/semour sweeny vessel (sic) - Any information which sheds some light on this bizarre story is very much appreciated]

Photos and Documents
Posted by Nevin at 8:11 pm 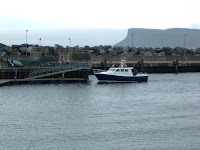 Have Moyle Councillors been largely excluded from the process that brought an end to Calmac's era as operator of the life-line ferry between Ballycastle and Rathlin? Could Council officials have kept them and the public better briefed?

I was very surprised that there was no civic function to herald the arrival of the new ferry service. I would have expected a welcoming party of Councillors and officials to greet the first users as they stepped ashore on July 1.

I'm told that the next Council meeting on Monday, August 11, will discuss some of the issues associated with the introduction of the new service. Let's hope that the minutes will be available on-line shortly after they are passed in one month's time. The most recent minutes are dated May 19. It would appear that someone isn't doing his or her job in a professional manner.

The Department [of Regional Development] has responsibility for providing a ferry to Rathlin Island, the north’s only inhabited offshore island. The current vessel offers a roll-on roll-off (RORO) service but is nearing the end of its useful working life. The operator Caledonian MacBrayne (Calmac) is wholly owned by the Scottish Executive and may not be permitted by its parent Department to operate outside of the Scottish undertaking for much longer.

Now, Calmac had set up a new company, Rathlin Island Ferries Ltd, in 2007 and had taken part in both tenders so this quote will have come as a bit of a surprise. Although the tenders claim there would be no capital spend the MIP document proposes £1.2m for a temporary passenger ferry to complement the Canna and £6.3m for two new RORO ferries. Documents currently on the DRD site make no mention of these figures.

Were Councillors or their officials informed about these DRD proposals?

At the time of the lease of Council facilities to Ciaran O'Driscoll, the new operator, did Councillors and their officials ensure that, for example, safety measures and insurance were in place? If not, why not?

The Council Chair took part in the recent safety inspection but it seems that Councillors weren't told by officials that there was to be such an inspection by HSENI and MCA. Alterations that are currently being made should have been in place on July 1.

I understand Richard Lewis, Moyle CEO, was a member of the Tender Evaluation Panel. Perhaps he'll be able to explain to Councillors whether or not the TEP had sight of all of the documents that the three tenderers submitted and were able to check that all of the boxes in Schedule A that were ticked should have been ticked.

The 12 passenger Causeway Explorer is 'deputising' for the 35(?) passenger St Sorney. It began this role on July 30 and has been in regular use since August 6. There must be a major problem with the St Sorney.

Moyle Council officials have put some additional minutes but they're still behind the times and, perhaps in need of correction:

The name of the new company is Rathlin Island Ferry Limited; Rathlin Ferries Limited was set up by Calmac. Councillor McConaghy's objections are missing from this minute but I'm told are to be added.


Photos and documents
Posted by Nevin at 2:55 pm