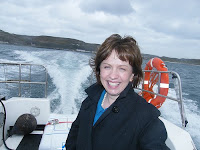 It's a shame Diane Dodds* and Mervyn Storey weren't aboard MISS-B-HAVEN!!

They appear to have gone on DENNIS THE MENACE or AQUASPORTS

Did they 'boycott' the St Sorney, the DRD subsidised fast ferry? A friend of a friend had to wait for about an hour-and-a-half the other day. Apparently the delay was caused by difficulties accessing the fuel supply.

PS I wonder what Richard Branson will make of this advert. Apparently it or something similar greets visitors at Belfast International Airport

Richard Branson dropped in - why don't you?
*Image on Flickr's dupphotos
Posted by Nevin at 12:40 pm

Ballymoney Museum reopens on 11 May 2009

Ballymoney Museum reopens 11 May 2009
Publish at Scribd or explore others:
Posted by Nevin at 7:59 pm

Have a heart, Minister of Health

Click on image to enlarge
It seems the Minister for Health may be able eventually to save £5 per person per week by removing the rewards given to some of those with a learning disability who attend day centres.

The money is a ‘reward’ for carrying out small tasks around the centres, not wages for the work done. However, the removal of the reward may well have a dispiriting effect on those who receive it.

Just imagine. "Look what I got today, Mum," says Joanne, as she waves the shiny £5 note in the air. "What did you get that for?" says Mum, as she basks in the beam of her daughter's delight. "Polished the seats in the minibus and did other stuff," says Joanne.

Joanne, her family and friends had recently raised £100 so that she could go with her mates in the day centre for one of their annual trips.

So what was Mum to say to Joanne when the 'rewards' note arrived from the day centre? "It's not your fault," said Mum, thinking that Joanne would feel she had done something wrong.

Surely, Minister, there must be other ways of dealing with the issue than causing day centre folks to feel guilty. I hope you can put a smile back on Joanne's face.

A brief mention about four minutes in.

The broadcast will be available until April 26.
Posted by Nevin at 7:06 pm

Is Ian Paisley jnr no longer No 1? The end of terrace or semi-detached property with the blinds drawn is currently on the market for £250,000 plus. There are other town-houses nearby starting at £147,000. House prices, in a surreal manner, have followed the career of the former junior minister: a steady heady rise followed by a sharp fall.

Perhaps a politician from a rival party or a rival from the same party (DUP) will step in and purchase this highly desirable property with its 'panoramic sea views overlooking Rathlin Island and beyond.'
Posted by Nevin at 3:18 pm

The Route Back Home, Ballymoney 2010

This email is to give you further details of 'The Route Back Home, Ballymoney 2010', a forthcoming genealogy event which will be facilitated by Ballymoney Borough Council.

This is a draft schedule and subject to amendment. Over the coming months, more information will be available as our plans progress and tutors/speakers are confirmed. Booking forms will be circulated in Autumn 2009.

Thank you for your interest.

The Route Back Home, Ballymoney 2010

Please feel welcome to make suggestions or recommendations for the content of the daily programme at The Route Back Home, Ballymoney 2010. Details of the cost will be confirmed soon but it is unlikely to exceed £100 [Sterling] per person for a full four day programme.

Seminars will be booked on a 'first come' basis. If there is a high demand for specific seminars, they may be repeated in the programme.

Mary O'Driscoll, one of the directors of Rathlin Island Ferry Limited, was apparently so intrigued by the Rathlin Rip name that she registered two websites under that label.

Her actions inspired me to establish a Rathlin Rip blog and the first yarn is loosely based on a series of alleged events from her home county, Co Cork.

Readers can make up their own minds about where facts end and fiction begins.
Posted by Nevin at 6:50 pm

Kingdom of Moyle - A President Calls

She was entertained in the Mayor's Parlour by William Graham, UUP council chairman, and opened the new Coventry House at Corrymeela. 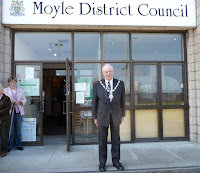 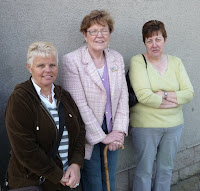 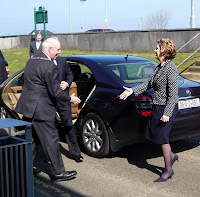 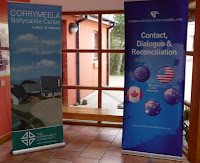 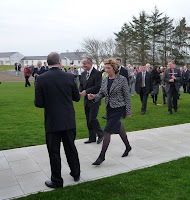 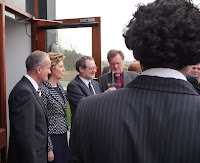 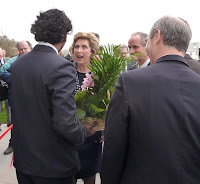