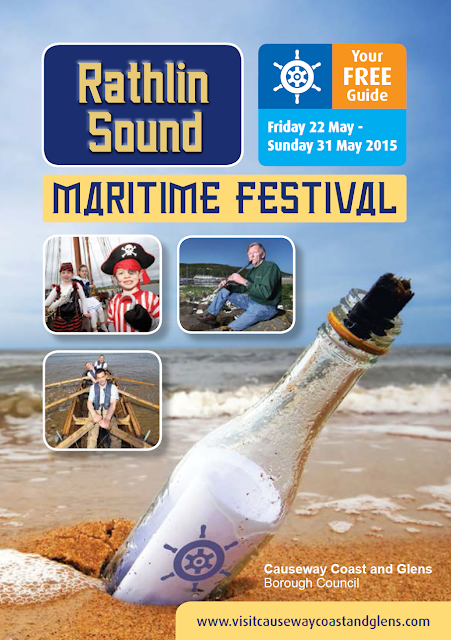 At the very heart of the spectacular Causeway Coast and Glens the communities of Ballycastle and Rathlin Island would like to extend a very warm welcome and would like to invite you to come along and join in and help celebrate our rich and diverse maritime culture during the Rathlin Sound Maritime Festival. The festival is centred on Rathlin Sound, the body of water that lies between Rathlin Island and Ballycastle.

Visit Causeway Coast and Glens
Posted by Nevin at 10:30 pm

Rathlin Ferry: Peter asked John McGrath to update him regarding the meeting with officials from NIAO.

On a related issue Peter asked Clare to ensure that any press coverage regarding the award of the contract could be co-ordinated around the Minister’s trip to the US.

I can find no details about NIAO's current interest in the Rathlin Ferry and I've not yet received a response to an email query I sent to NIAO over one month ago, not even an acknowledgement. I also can find no press release linked to the ministerial visit.

The Environmental Services Committee of the new Causeway Coast and Glens Borough Council met on 5 May - just ten of the fifteen councillors were present:

The agenda is online but the officer's report should be but isn't. Hopefully the Council will adopt a more transparent approach in the near future.

The proposed new Rathlin ro-ro ferry has a 1.6 metre draft and this will mean the construction of new berthing facilities. If I heard correctly planning permission has yet to be sought and any associated environmental impact assessments will have to be carried out. Also all costs will be covered by DRDNI but the Council will have ownership of the new facilities. 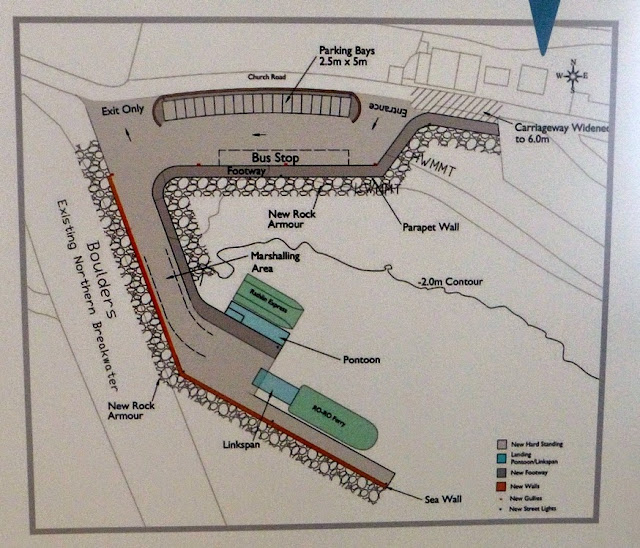 The decision to award the contract to Arklow Marine Services was taken on the 30th April and publicised on the 8th May. Presumably further details will appear in a DRD press release later this week.

I sent a reminder email a few days ago and received this prompt response:

I apologise for the delay in responding to you while I sought to establish some facts on this matter. However, I have to tell you that the Office currently has no continuing interest in this subject.  The Comptroller and Auditor General’s report was published in November 2008. I am unaware of any further substantive action since 2009. Should you have any new information that you wish to present, I would be happy to consider it.

The query I posed about the 'continuing interest' - referred to in the DRDNI WBR minutes - has not been answered!

NIAO reply [28 May 2015]: I can’t add anything more to this. Neither I nor my colleagues are aware of any recent meeting between DRD and NIAO on the subject of the Rathlin ferry. It follows that none of us have seen any notes of any such meeting. I can only suggest, once again, that if you have any questions over the information provided on DRD’s website you should contact DRD. I simply do not have any information about this.

Is it not strange that DRD flags up an issue involving NIAO which NIAO has no knowledge of?
Posted by Nevin at 7:15 pm 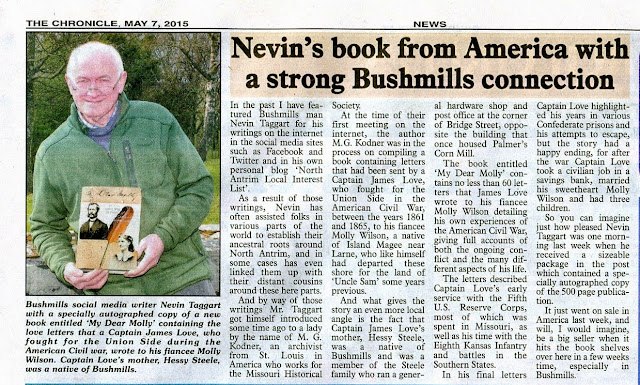 James Edwin Love was born in Bushmills in 1830. He grew up in Ballymena but by the time he was 12 both his parents were dead and when he was 18 both his young sisters were dead too. He left his County Antrim home in 1849, along with his younger brother, bound for the USA to link up with a Love uncle and two Steel aunts, his mother's sisters from Bushmills. Some years later in St Louis, Missouri, he met Molly Wilson, a native of Islandmagee.

Just recently I've discovered some details of a connection between the Loves of Ballymena and the Macnaghtens of Bushmills. A PRONI file D1416/1/8 contains a Memorandum of Understanding between Sir Edmund MacNaghten of Dundarave House and James Love and Co for the erection of a mansion house 'agreeable to the directions and subject to the approbation of Charles Lanyon'. The contract is valued at £6020 and James Love, an uncle of James Edwin Love, and John Potts and Robert Corry, both of Belfast, sign a £1000 bond. The bond is dated the first day of August, 1846. A second Memorandum of Understanding, this time involving James Love of Ballymena and John Hall of Bushmills, is for the building of farm offices and a stable yard at Dundarave House. The contract is valued at £4339 and the £1000 bond, dated the first of January 1848, binds Love and Hall as well as two Ballymena merchants, James Taylor and James White. James' wife was Sarah Taylor.

Alexander Patterson Love was a younger son of James Love and Sarah Taylor. He may have been named after Rev Alexander Patterson who was minister of the Presbyterian Church in Wellington Street, Ballymena.
Posted by Nevin at 3:26 pm

Freedom of Information requests seemingly have created a problem for those in public governance who regulate the flow of information.

Some minutes of meetings now are little more than 'action points'. The following exchange at the Committee for Culture, Arts and Leisure on April 23, 2015 would suggest that our elected representatives might not have detected the significant drop in information content** that has taken place in recent years:

Mr Hilditch: Maybe this is a question more for DCAL officials. There was a get-together around 12 December: is there a minute of that meeting?

Ms Smith: There were action points agreed at that meeting.

Mr Hilditch: Was there a minute of that meeting?

Mr Hilditch: Sorry, was there a minute of that meeting?

Ms Smith: It depends what you define as "a minute". A minute would be —

Mr Hilditch: Is there a proper minute of the meeting?

Ms Smith: An action point sheet was produced as a result of that meeting. It has been an ongoing process. It was not a one-off. Action points were agreed. Subsequently, we have been liaising —

Mr Hilditch: Surely they were put together at the end of the meeting in relation to the minute that was taken. Is there a minute of the meeting?

Ms Smith: The action points are the minute.

Ms Smith: There was a note with action points.

[Definition of a minute: "Permanent, formal, and detailed (although not verbatim) record of business transacted, and resolutions adopted, at a firm's official meetings such as board of directors, manager's, and annual general meeting (AGM). Once written up (or typed) in a minute book and approved at the next meeting, the minutes are accepted as a true representation of the proceedings they record and can be used as prima facie evidence in legal matters.]

Here is a snippet from a 'minute' of the DCAL Departmental Board meeting on February 24, 2015:

12.1 Rory Miskelly provided an update to the Board on progress on the Regional Stadium programme.

12.2 The Board noted the progress with each stadium and discussed the key actions which will be taking place in the weeks ahead and the management of key risks and challenges, in particular developments in the Casement Park project in light of December’s Judicial Review decision.

So there were 'actions', 'risks' and 'challenges' - but there's no indication of their nature or significance.

'Re-energise' is a new term to me in the context of that April 25 CCAL meeting:

Mr Miskelly: I believe that we are moving to a meeting tomorrow with key principal stakeholders, and we will then move to re-energise the STG [safety technical group] in about two and a half weeks.

Ms Smith: I think that all members of the STG are committed to the importance of delivering a safe facility. We will certainly work closely with Sport NI and the group to re-energise it, as you say, and to ensure that it has very clear —

The Chairperson (Mr McCausland): Sorry, will you speak a wee bit louder?

Ms Smith: Absolutely. I am just giving an absolute assurance that, where the respective responsibilities are concerned, the group operates as effectively and efficiently as it can, has the appropriate supports and the communication levels are absolutely clear between the various stakeholders and interested bodies. It is really important that we have very strong communications between the various parties involved and the work of the group, the Department, the GAA and the design team. Moving forward, we really want to ensure that we have strengthened and made that very clear, given the importance of all this.

Perhaps our senior public servants, elected and bureaucratic, are equally in need of 're-energising'. It seems the STG chair was sufficiently 're-energised'; he blew the whistle on alleged bullying.