Parades Commission - A Most Curious Apology

Just recently I noticed, in a newspaper report, a reference to an 'unnotified protest' in Ballycastle on July 12, 2016. This is incorrect. It was submitted electronically but very late to the Parades Commission website; it wasn't there early in the morning of July 12 but did appear a few hours later; it was subsequently removed without explanation.

I sent the following query to the Parades Commission [PC] on September 28, 2016:

I was following events in Ballycastle on July 12 on Twitter and other media. When I checked the PC website I saw details of a protest by an unnamed group. The protest took place during the course of the parade but was terminated following alleged threats of arrest. However, I subsequently discovered that this PC posting had been removed. When was it removed? Why was there no post outlining the PC response to this notification as would be the case when conditions are applied to protests and parades? Isn't the PC guided by the Model Publication Scheme provided by the Office of the Information Commissioner so that members of the public can easily see what decisions have been taken as well as why? Such responses should be in a format that is easily accessible ie searchable.

I received this very prompt reply from the PC Secretariat on September 28, 2016:

With respect to your correspondence of 28 September 2016, please note the following.

If any protest against the parade did subsequently take place in Ballycastle on the 12 July 2016, the Parades Commission received no notification of same. Any such protest places itself in the category of an unnotified event and it falls to the PSNI to investigate, as the Commission has no powers in these matters.

Had the Parades Commission been required to consider a properly notified protest and issue a determination, the full details of the notification and the associated Commission decision would have been published on the Commission’s website.

I hope that this is of assistance.

[* Was the protest notification withdrawn?]

With respect to your queries about the ‘Twelfth’ parade in Ballycastle, please note that this parade was not regarded as being contentious**, therefore it was not labelled so. As no contention was attached to the parade it was not necessary for the Commission to consider it, or issue any determination.

I shall bring your other queries regarding the withdrawn protest to the attention of the Commission and will respond to you as soon as possible.

[** Such parades in Ballycastle are contentious but not to the same degree as other places. This would be well known to members of the PC and PC Secretariat or could be easily checked.]

Your further correspondence of 30 September 2016 refers.

The 11/3 (proposed protest notice) was submitted online at 3.32am on the morning of 12th July proposing a protest to be held at 12.45pm at the LOL No 23 parade in Ballycastle later that same day.

The PSNI only became aware that the 11/3 had been submitted online when the organiser’s representative contacted them about it around 11.00am on 12th July. The PSNI immediately contacted a member of the Commission Secretariat staff to advise that a late protest notice had been submitted.

The PSNI contacted the Commission Secretariat at 12.55pm to advise that the protest organiser had approached PSNI in Ballycastle to inform them that he was withdrawing his protest notice.

You have enquired about when details of the protest notice were put on and subsequently taken off the Commission’s website.

Also, as stated in earlier correspondence, if an unnotified protest was held in Ballycastle on the 12th July, then this is a matter for the PSNI.

I would also reiterate that the LOL No 23 parade in Ballycastle on 12th July had not been deemed sensitive and the Commission did not formally consider the parade notice.

I hope that this fuller explanation answers all of your queries. If I may be of further assistance, please feel free to contact me.

This follow-up reply was subsequently followed by a curious apology on October 12, 2016:

Apologies for my initial response of 30 September 2016, which was incorrect*** with respect to the placing of the notification on the PC website.  My detailed response of 5 October 16, sets out the correct position.

As the notification was received in the early hours of 12 July 16, and as the Parades Commission office was closed on both the 12th. and 13th.  of July, there was no-one in the office to place the notification on the website.

As it transpired, the protest had been withdrawn on the afternoon of the 12th. July, so when the Commission office had re-opened on the 14th. July, there was effectively no protest to be considered. This being so, it was not necessary to note details of the withdrawn protest on the website.

Any unnotified protest which may then have taken place during the parade on the 12th. July 2016, should be addressed by the PSNI.

I apologise for any confusion caused by my initial response, and I hope that I have now clarified the matter to your satisfaction.

[*** The initial statement about the protest by an unnamed group being placed on the PC website was correct; it's the apology/clarification which is incorrect. It should be obvious that the PC office wouldn't need to be open to the public for entries to be placed on or removed from a website.

PS There is now some doubt about whether or not the protest notification was withdrawn [see * note]. Confusion reigns!
Posted by Nevin at 1:14 pm 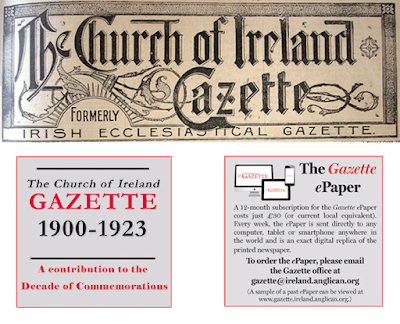 Church of Ireland to digitise its Gazette from 1856