The Department of the Environment (DOE) has confirmed Dr Andrej Sovinc, representative of the IUCN, will visit the World Heritage Site following an invitation from the Northern Ireland Environment Agency (NIEA).

The remit of Dr Sovinc’s visit will be:

- to visit the Giant’s Causeway and Causeway Coast World Heritage property and meet those responsible for its protection and management;

- to assess the overall state of conservation of the property and its Outstanding Universal Value;

- to provide technical advice on the management of the property and its Outstanding Universal Value; and

- on the basis of the findings, to prepare a joint draft report on the requirement for ensuring the protection of the property’s Outstanding Universal Value.

The February visit sounds more like an inspector calls than a response to an invitation from a Northern Ireland minister. The Department of Culture Media and Sport is the Westminster department which is responsible to UNESCO for the protection of World Heritage Sites across the UK.

Draft Decision:  36 COM 7C
The World Heritage Committee,
Other conservation issues not reported on at the 36th session under Items 7A and 7B
12. Requests furthermore the State Party of the United Kingdom of Great Britain and
Northern Ireland to halt the proposed development of a golf resort at the World
Heritage property “Giant's Causeway and Causeway Coast” until its potential impact on
the Outstanding Universal Value of the World Heritage property has been assessed. .. LINK

“Protected Planet”, managed by the United Nations Environment Programme’s World Conservation Monitoring Centre (WCMC) and supported by IUCN and WCPA presents relaunched and repackaged the World Database on Protected Areas in a user friendly internet accessible manner and linked to Google applications. Be sure to check www.protectedplanet.net.

Trevor Sandwith, Director of IUCN Global Protected Areas Programme was recently elected as Chairman of the  International Academy for Nature Conservation, part of BfN, located on the island of Vilm, Germany. Andrej Sovinc is also on the Council. The Academy provides support and interchange to nature conservation professionals in the European Union countries."

It's a little disconcerting that the Protected Planet folks can't find us on the map!

'Many and sharp the num'rous ills
Inwoven with our frame!
More pointed still we make ourselves
Regret, remorse, and shame!
And Man, whose heav'n-erected face
The smiles of love adorn, -
Man's inhumanity to man
Makes countless thousands mourn!
... Robert Burns 1784


Then there's man's inhumanity to woman. Just a few hours ago, I noted these words on my Facebook wall; they were written by a young friend of mine in South Africa:

I want to know, when are we going to finally be horrified enough to stand up and say we wont tolerate this any longer, South Africa? When are we also going to start gathering in public spaces in protest? Why is everyone keeping so silent about this? Are we that defeated or is it just not our problem? Its time to rise, South Africa!

Where has love gone? Once again I'm reminded of this quote from the late Sr Souboris of Loreto Convent, Coleraine, in the summer of 1973. It was written about the actions of some young men who were about the same age as Anene:

Thank you for directing to us young people of such unselfishness and reliability. Each in his own way made a valuable contribution to the holiday. I personally learned a tremendous amount from their unselfishness. I only wish more people in our divided communities could experience how easy it is to love and live together once the will to do so is there.


Where are the leaders who will act as appropriate role models for this and future generations of men? As we know recently from India and other places, South Africa isn't the only place where men carry out atrocious acts against women.

In Bredasdorp, a community searching for its soul
Posted by Nevin at 4:38 pm

Coastguard SOS emailed (on four separate occasions) and asked a straightforward question of all Westminster MPs: to confirm whether they are FOR or AGAINST planned closures of maritime rescue & coordination centres. (MRCC’s) 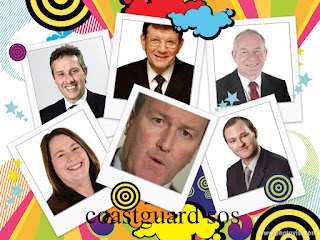 Earlier cross-party support for the Save Belfast MRCC in Bangor.
Posted by Nevin at 4:28 pm