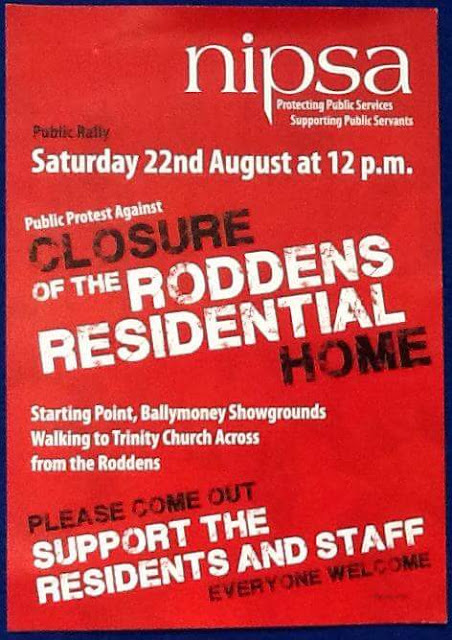 The “Save the Roddens” Steering Committee have organised a protest March in Ballymoney on Saturday 22nd August at 12pm.

Following the successful Public meeting held at the end of June, the “Save the Roddens” steering committee have this week released details of a planned March and Rally in Ballymoney.

Marchers will assemble at Ballymoney Showgrounds from 12pm and move off at approximately 12.15pm, the march will make its way down North Road, High Street, Main Street, Meetinghouse street and Newall Road, ending in the carpark adjacent to the Roddens Residential Home.

The Northern Health and Social Care Trust launched a public consultation period to decide the future of The Roddens in Ballymoney in June.

The public consultation runs until October 2.

Causeway Coast and Glens Borough Council has just published, on request, a copy of the Stutt Report in 'Council Documents'. This report will be of interest not just to folk in Ballycastle district but also to those in other areas who are or who might be facing a reduction in health and social care provision. I've posted a copy on Scribd.


The Stutt Report was presented to the Save the Dal Group as well as to the Council; it includes a statement by the Council.

NB The 'Save the Roddens' campaign in Ballymoney continues.
Posted by Nevin at 9:55 pm