The following documents were supplied by Caledonian MacBrayne on 18 December 2008 following a Freedom of Information request:

The names of DRD and Moyle Council officials were redacted.

What information was provided to the tenderers about the two Ballycastle pontoons which have been used by the passenger only ferries since July 1, 2008? Have these pontoons been funded for commercial or non-commercial use?

Have Moyle councillors and other stakeholders been involved in the redesign of harbour facilities at Ballycastle and Rathlin?

Were all tenderers informed about the 'clarifications' that were provided by public servants to Mr O'Driscoll?

MV Bruernish in the news

More recently, [Seamus Boyle] realised there was potential for a third, larger ferry which could also carry vehicles and he purchased the 'Bruernish'. All his expansion was achieved without State hand-outs.

Wasn't the MV Bruernish supposed to be the relief (vehicle carrying) vessel for the MV Canna?

7.4.3 .... Moorings or pontoons for other vessels in the harbour should not be within two vessel lengths of the shore ramp or berth.

Perhaps the designers of the new pontoon in Ballycastle harbour should have noted or been made aware of this report.

Can anyone provide a copy of the feasibility study report into the addition of a passenger only ferry to the Ballycastle-Rathlin route, in particular the suitability of using a 80/100-passenger catamaran in the Class D turbulent waters of Rathlin Sound?

** Saltire staff were also involved in the Rathlin and Cape Clear ferry contracts.
Posted by Nevin at 2:52 pm

North Antrim in the 1911 Census of Ireland is now Online

There will be many curious spellings, including those caused by transcription error. For example, I've spotted McLure (McClure) and Cozier (Cozies).
Posted by Nevin at 11:47 pm

A Long Way From Cape Clear To Here 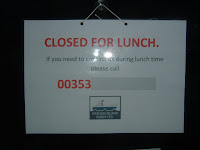 Well, that used to be the notion but the internet and, in particular, the blog have provided a channel for the easy exchange of information.

I'm converting the official investigation report into a more accessible format for the benefit of our friends in Co Cork and anyone else who wishes to read it.

In the meantime, here's part of an item from the News Letter that has been published in emara News - with associated editorial comment:

We understand that one of the major reasons that the D.R.D. was thought to have been considered to have behaved reasonably in awarding the contract to the present operator is that it took up “references”, as it were, from the D.C.R.G.A., which expressed the opinion that the operator was on “par” with the other operators to the other islands of the Republic. This was taken as an endorsement of the operator.

If the D.C.R.G.A. genuinely believed this, which I can only presume it did, having applied penalties for breaches of contract on three occasions, seen crew numbers reduced, maintenance standards fall, several deadlines be missed for the introduction of a new standby boat and been receiving numerous complaints from Cape Clear residents – even if it does seem to be of the opinion that islanders are a class of person peculiarly given to unjustified carping and with little knowledge of the sea the weather and boats, and which can never be satisfied – does it feel that its opinion is still justified? If it does, presumably the other operators around the coast are quite a bunch of cheese-paring chancers who care little for their customers from the islands, or they will be feeling very insulted by the standard they are being told they are equal to. Personally I’ve seen little evidence of low standards elsewhere, but then I probably wouldn’t be able to make a reasonable judgment having my mind influenced by 29 years of living on an atlantic island!

Although the Easter Rising, 1916, took place in Dublin and was denounced, at the time, by the majority of the Irish people, it was to have momentous consequences in Irish history.

Britain’s treatment of those involved created martyrs and, as the poet WB Yeats put it: “All is changed, changed utterly. A terrible beauty is born.”

Ireland was a changed place after 1916 – a place polarised, more extreme and more bitter and all of this will be dealt with in what will be a fascinating look at a most significant event in Irish history.

Mole Mutters, December 2008
Publish at Scribd or explore others:
Posted by Nevin at 1:44 pm

"This report* examines the issues involved in preventing and investigating suspected fraud in public sector contracts and points to what should be best practice. The key challenge to public sector bodies is to ensure genuine competition between contractors and to prevent collusion, either between groups of bidders or between bidders and officials who place orders."

Declan O'Loan: " ... all is far from well in public procurement" - and yet all is hunky dory in the awarding of the public contract!!

The official report, in a non-user friendly format, has been tucked away in the Publications section of the DRD website. There's no customary press release and no front page coverage for this 'independent' report. Even the Minister has a hang-dog look.
Today at Dormant OOPS Stormont members of the Committee for Regional Development will be briefed, in a closed session, about the results of the three 'independent' investigations pertaining to the Rathlin ferry contract process.

But why the need for secrecy? What have Ministers and officials got to hide - from each other, the mainstream media and last, and by all means least, the public? What will be revealed, what has been concealed, that isn't already in the public domain?

In-house investigations will always smack of whitewash so why did the authorities follow this path, not least when several other procurement processes have ended up in the courts? Funnily enough, Steve Rowsell, who was brought in as one of the leaders of these investigations, has already acted as an expert witness in two major procurement court cases, cases which the authorities have subsequently lost.

The prolonged delay has had consequences: the greater the delay the more information has flowed thanks to Freedom of Information legislation. It's interesting to note that the DRD website has been experiencing 'technical' difficulties:

The Department for Regional Development's website has been experiencing technical difficulties over the past number of weeks and we are currently only able to provide a limited service whilst we continue to resolve all of our difficulties.

That message went up, er, several months ago!! Some online information about the background to the Rathlin ferry contract was 'missing in action' from the DRD website but had been Google cached, a process that is apparently largely unfamiliar to senior civil servants, even to members of the Information Commissioner's office.

How the saga unfolded

Meanwhile in the courts an MLA is threatened with jail if he doesn't name a whistleblower.

Perhaps John Dowdall, NI Comptroller and Auditor General, should be playing a pro-active role when it comes to whistle blowing disclosures.

[Click on image to enlarge]
Can anyone identify people and location for this old photograph. It's on a postcard. Mrs Getty is written on the reverse and she is most likely Sarah, Mrs William Getty, of Magherintendry. The old gentleman with a stick seated towards the centre of the front row looks very like John McFall, also of Magherintendry.

Replies to nalilblog gmail address in right panel - fourth down.
Posted by Nevin at 10:10 pm