Ballycastle -The Riviera of the North 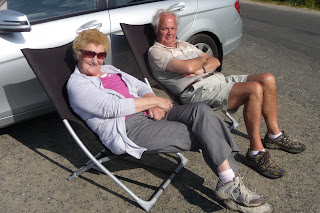 Click images to enlarge
A couple from Clanrye country taking the sun near Pans Rocks before moving a little further west towards the banks of the Bann. 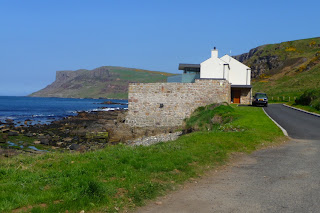 Room with a view. The new Old Saltpans with the ever so old Fairhead in the background. 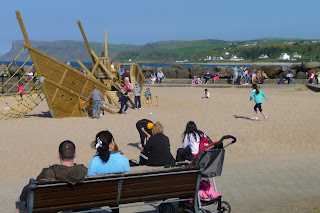 The Bounty. A new plaything for the wains in the sandpit at the end of the marina as the adults relax and look on. 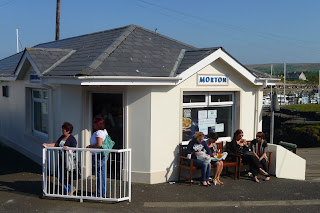 Time for some cod and chips in Mortons down by the harbour - or one of Harry's ices - or both! 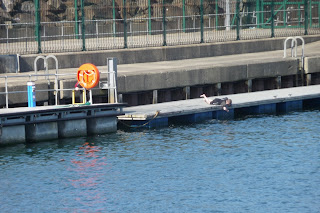 Lads being lads. A few moments earlier there were two others lying beside this one on the pontoon that is currently being used by the St Sorney. Perhaps the Harbour Master should have a word. 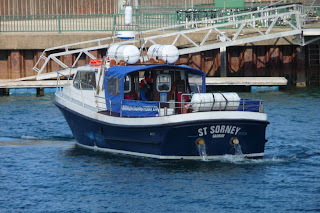 The St Sorney deputising for the Rathlin Express catamaran. I bumped into Mary, one of the ferry company directors. When I asked about the two bandaged fingers on her left hand, she said, "I was fighting. I bit the other fellow's ear off". Now that's a ropey explanation if ever I heard one! Maybe just as well I didn't ask about the catamaran!

It's important to emphasis the role of a HM Coastguard Co-Ordination Centre
"What MRCC Belfast do
The role of HM Coastguard is laid out in the Coastguard Act 1925.
“HM Coastguard is responsible for the initiation and co-ordination of civil maritime search and rescue within the UK maritime search and rescue region. This includes the mobilisation, organisation and tasking of adequate resources to respond to either persons either in distress at sea, or to persons at risk of injury or death on the cliffs or shoreline of the UK.”
Belfast Coastguard is:
Staff at Belfast Coastguard plan and coordinate search and rescue (SAR) response as per the Coastguard Act 1925.  This includes tasking as required Rescue Helicopters, RNLI Lifeboats, Coastguard Teams, other Emergency Services assets, and/or any other units available at that time.
To enable staff to do their job effectively, they have to have a thorough understanding of and be able to operate Coastguard communications equipment including radios, satellite communications, Digital Selective Calling (DSC), Automatic Identification System (AIS), telephones (including the 999 system), e-mail, and paging systems." 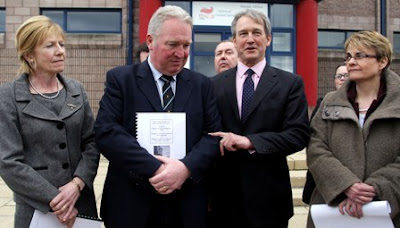 Ministers are poised to scale down their plans for a radical shake-up of the UK Coastguard service that could have left Northern Ireland without a dedicated base.

While Government sources insist there will not be a U-turn on reforms, some concessions are being considered, including keeping more bases open round-the-clock.

Changes to the proposals are also understood to include closing fewer stations, which will fuel hope among campaigners fighting to save Bangor.

The Belfast Lough emergency centre was earmarked to be downgraded to daylight-only operations or closed altogether under Shipping Minster Mike Penning's plans.

Previous NALIL report
Posted by Nevin at 11:18 am

The Act of Union Virtual Library is a unique collection of pamphlets, newspapers, parliamentary papers and manuscript material contemporary with the 1800 Act of Union between Ireland and Britain. The entire content is searchable bibliographically, the search results displaying individual images that can be browsed by turning the pages of each virtual book or document. A free text search is provided for the pamphlets and parliamentary papers.

The website is of inestimable use for scholars in that it provides immediate access to a panoply of documents held in various public institutions in Belfast, more often than not, in specialised collections. Those with a more general interest in the Act of Union will also benefit both from exposure to these archives and to the myriad search functions and explanatory notes contained within this website.
Posted by Nevin at 4:58 pm

I'm an occasional contributor to Mark Devenport's blog on BBC Northern Ireland, The Devenport Diaries. Just recently I was subjected to some personal abuse by a fellow commenter so I submitted a brief complaint to the blog moderators. My complaint was based on the values expressed in the BBC mission statement. Here are some of the relevant ones:

Further to your complaint about some of the content on a BBC blog (reference number ******), we have decided that it does not contravene the House Rules and are going to leave it on site.

I then said: Why do you allow this poster to use a term like '**** ... ****'? Would you publish such a remark if it were directed against Mark or any other member of the BBC? I don't think so.

Further to your complaint about some of the content on a BBC blog (reference number ****), we have decided that it does indeed contravene the House Rules and have removed the offending material.

Thank you for pointing this out to us.

Now why couldn't the moderators have said that first time round?
Posted by Nevin at 11:28 am

Some of the blogs that I've published during the course of the past few years have been based on responses to Freedom of Information requests that I and/or others have submitted. The quality of the responses with regard to personal information has been varied.

Some data that I would have expected to have been redacted has been left in place so I've used my own judgement and removed what should not have been released. Some electronic redaction is ineffective ie switching to text mode has removed the electronic black band.

Holding Ministers and public servants to account can be a slippery business. The absence of detailed notes and minutes, deliberate or otherwise, is not in the public interest as an audit trail will have gaps in it. Such gaps can then lead to a miscarriage of justice if the gaps permit wrong interpretations to be made and conclusions to be reached.


Such an exchange leaves a gap in the audit trail.
Posted by Nevin at 5:49 pm