Why didn't officials from the North Eastern Education and Library Board (NEELB) adopt a structured approach to consultation with parents, pupils, teachers, principals, governors and other interested parties? The mish-mash illustrated by Appendix 6 in the consultation report appendices makes Basil Fawlty look like a good organiser! 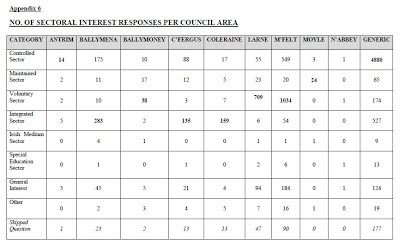 
The apparently passive NEELB approach has generated a highly skewed set of responses: the voluntary sector was well to the fore in Larne and Magherafelt, the integrated sector dominated responses in Coleraine and was over-represented in Ballymena and Carrickfergus, and the maintained sector largely opted out of the process.

Why are a large majority of responses from the integrated sector on-line ones? Was different advice given to different sectors and, if so, by whom?

NEELB highlights the positive response by the integrated sector in Coleraine to the on-line survey. Why were on-line responses given such prominence over other forms of response? Should this emphasis not have been made crystal clear to all participants in advance?

What has happened to responses to the survey by parents from Coleraine High School? I'm informed by various sources, including the Save CHS Facebook webpage, that 414 hard copy submissions of the on-line survey were returned by parents to the school yet this figure does not appear in Table 8 or in the amended version of Table 8. Is the change from 47 to 447 in the 'By letter or submission' column an attempt to camouflage the blunder? Were these 414 submissions factored into the deliberations that led to the recommendations that were submitted to the Education Committee (Schools)? Perhaps it's time members of the Committee took a serious look at the consultation process; they could begin by examining the fate of those 414 responses and whether or not the generic/general responses received the same favourable treatment as other responses.

[** addition: According to its own definition, figures released by NEELB in December 2012 for responses in the Coleraine council area to the on-line consultation should have included hard copy responses received. If you add the 414 'missing' CHS responses to the claimed 17 on-line responses for the controlled sector then the NEELB assertion that '81% of all responses to the on-line survey were from the Integrated Sector' plummets to a much more modest 26%.]

Questionnaires based on the truncated area plan published in May 2013 are to be submitted to NEELB by September 16. When you take out the time taken up by examinations and the school holidays the time left for collective deliberation amounts to little more than a fortnight in September. Why the rush? How can parents and others respond to this second consultation when the recommendations were generated from such a deeply flawed first consultation?

A clear message from the above shambles is that parents and others should give serious thought to second level provision and, if they are dissatisfied with the Board's recommendations, they should submit alternative proposals and lobby school principals, governors and members of the Education Committee (Schools).

The NEELB folks may have left themselves open to a legal challenge; the Education Committee (Schools) may have endorsed a wholly unscientific approach to consultation.


The majority of respondents felt there was little or no account taken of the Maintained; Further Education; Special Educational Needs and Integrated Education sectors, which do not maximise the use of the schools’ estate.

This quote from the NEELB report indicates that respondents would have preferred a collective single area plan for Coleraine so that the burden of change would be carried by all sectors, not mainly by the controlled one. 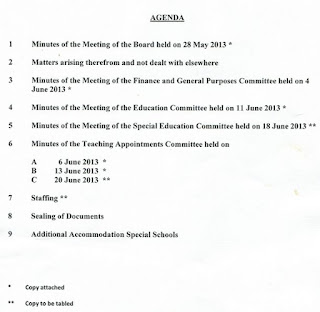 This is a scan of the NEELB Board agenda for Tuesday, June 25. There's no mention of time or location; I'm told that the meeting begins at 2 pm and that the venue is Board HQ at Lough Road, Antrim. How are members of the public supposed to know what topics are being discussed? Perhaps it's time the Office of the Information Commissioner insisted on greater transparency.