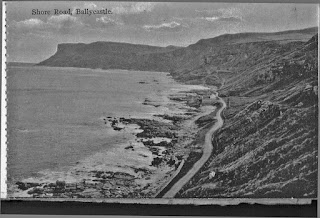 
The tussle for the conversion of part of a public road to something akin
to a gated private drive-way with pedestrian access continues.

When Moyle District Council goes into committee to discuss the issue it increases speculation that Council does not wish ratepayers and other members of the public to know what is being done or being conceded in their name:

There is no mention of the Abandonment Order in the February minutes during a session which was also held in committee:

Sources tell me that the Council's current position is that it will no longer oppose abandonment should a request to Roads Service for abandonment be made. If correct, some folks have put the cart before the horse but have not informed the ratepayers or other members of the public that an about-turn has taken place. I'm informed that a recorded vote was taken and, when the minutes appear, we will know which councillors changed their stances.

Perhaps its also worth pointing out that Council minutes are now being published in a format that is not searchable and, presumably, this is in breach of the Information Commissioner's Model Publication Scheme.

Planning Service continues to act in a peculiar manner. It strongly opposed the proposed redevelopment of the site and then just a few months later slipped the plans through in a batch of eight for recommendation of acceptance; the latter took place in a pre-Christmas council meeting.

In October 2012, the Enforcement branch ordered the site owner to remove unapproved works: 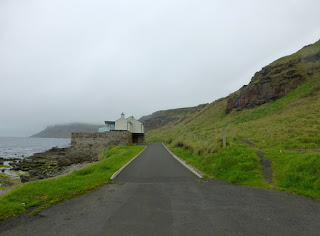 The lights, security hut and toilet have been taken away but the kerbing remains. The date for a positive response to the enforcement order has long since passed but I've found no evidence of further enforcement action.

Just recently Planning Service has put a new planning application through its streamlined procedure, a procedure that removes the application from the Council's monthly scrutiny function.

However, those applications considered of a straight forward non-contentious nature will be circulated to the Council on a weekly list of applications received under the Streamlined Application process.

You'd think by now that the Planning Service would have got the message that there is a measure of contention, that planning officers would have read the reports of their own enforcement officers! The local newspaper advert doesn't indicate that the application has been streamlined!

The new application seeks retrospective permission for the kerbing as well as permission to erect a gate that would straddle most of the public road:

Retention of Land for Use as Domestic Curtilage and Ancillary Works to Include Concrete Kerbing, Gate and Satellite Dish.

Is it really in the public interest that decisions, which may have wider significance, should be taken when the public have been deliberately excluded? Do such actions convey utter contempt by elected representatives and other public servants?
Posted by Nevin at 5:14 pm